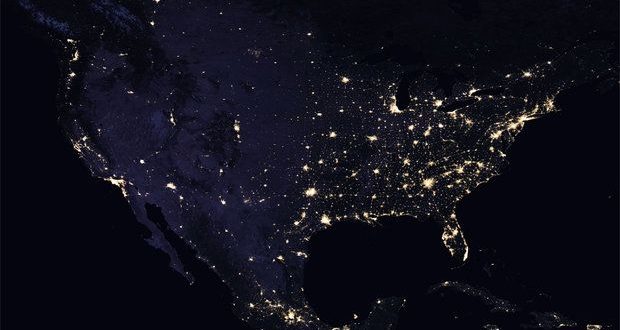 NASA releases clearest image yet of Earth at night (Photo)

NASA releases clearest image yet of Earth at night (Photo)

NASA released new global maps of the Earth at night today, and the space agency says they’re the clearest composite views yet of human settlement patterns on our home planet.

This composite image, one of three new full-hemisphere views, provides a view of the Americas at night. The clouds and sun glint — added here for aesthetic effect — are derived from MODIS instrument land surface and cloud cover products.

In the years since the 2011 launch of the NASA-NOAA Suomi National Polar-orbiting Partnership (NPP) satellite, a research team led by Earth scientist Miguel Román of NASA’s Goddard Space Flight Center has been analyzing night lights data and developing new software and algorithms to make night lights imagery clearer, more accurate and readily available. They are now on the verge of providing daily, high-definition views of Earth at night, and are targeting the release of such data to the science community later this year.

Today they are releasing a new global composite map of night lights as observed in 2016, as well as a revised version of the 2012 map. The NASA group has examined the different ways that light is radiated, scattered and reflected by land, atmospheric and ocean surfaces. The principal challenge in nighttime satellite imaging is accounting for the phases of the moon, which constantly varies the amount of light shining on Earth, though in predictable ways. Likewise, seasonal vegetation, clouds, aerosols, snow and ice cover, and even faint atmospheric emissions (such as airglow and auroras) change the way light is observed in different parts of the world.A’s Global Imagery Browse Services (GIBS) and Worldview tools.

Web articles – via partners/network co-ordinators. This website and its contents are the exclusive property of ANGA Media Corporation . We appreciate your feedback and respond to every request. Please fill in the form or send us email to: [email protected]
Previous: San Jose Sharks beat ‪Edmonton Oilers 3-2 in overtime in Game 1
Next: UW Astronomers Have Captured the First-Ever “Image” of a Dark Matter Web