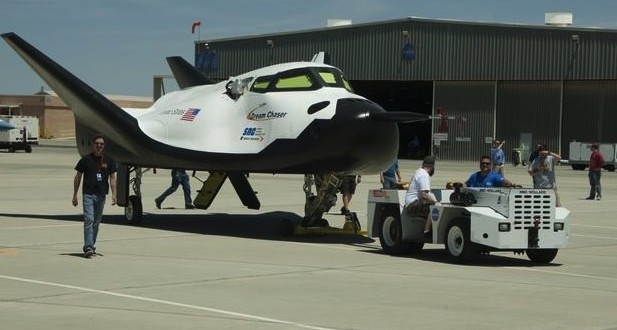 The plan to build to build the next generation of space taxis to take astronauts to the International Space Station has hit a big bump in the road.

After rewarding Boeing and SpaceX with the contracts to build the spacecrafts NASA is now asking the companies to stop their work on the project.

The move comes after aerospace company Sierra Nevada filed a protest of the decision after losing out on the bid.

Sierra Nevada was competing against Boeing and SpaceX for a share of the $6.8 billion CCP contracts. The contracts will cover all phases of development as well as testing and operational flights. Each contract will cover a minimum of two flights and a maximum of four, with each agency required to have one test flight with a NASA representative on board.

On Sept. 16, NASA announced who the winners were of the Commercial Crew Transportation Capability (CCtCAP) contracts. Sierra Nevada then filed a protest with the GAO on Sept. 26, and issued a statement saying the protest was asking for: “a further detailed review and evaluation of the submitted proposals and capabilities.”

According to NASA’s Public Affairs Office, this legal protest stops all work currently being done under these contracts. However, officials have not commented on whether-or-not the companies can continue working if they are using private funds.

The GAO officially has until Jan. 5 to rule on the protest, but could issue their response in as little as a few weeks. If the GAO decides in favor of Sierra Nevada, NASA could either re-compete the contracts or change its decision. As part of their challenge, Sierra Nevada stated the following: “there were serious questions and inconsistencies in the source selection process.”

In a press release, Sierra Nevada said: “SNC believes the result of further evaluation of the proposals submitted will be that America ends up with a more capable vehicle, at a much lower cost, with a robust and sustainable future.”

NASA has yet to release any contract specifics and has not revealed why Boeing and SpaceX were chosen over Sierra Nevada, who’s Dream Chaser spacecraft possesses the ability to conducted a controlled landing on a runway as opposed to Boeing’s CST-1oo or SpaceX’s Dragon V.2 – which splash down in the ocean. Dream Chaser, a lifting wing bodied design, is a mini shuttle which bears some resemblance to NASA’s retired fleet of orbiters.

Currently, both Boeing and SpaceX are on track to begin launching crews by the year 2017, but any delays as a result of this protest, may push that date back further.

Web articles – via partners/network co-ordinators. This website and its contents are the exclusive property of ANGA Media Corporation . We appreciate your feedback and respond to every request. Please fill in the form or send us email to: [email protected]
Previous: Earthquake : Overnight 3.6-magnitude quake jolts Vegas
Next: Mountie shot in Nunavut, suspect arrested : RCMP