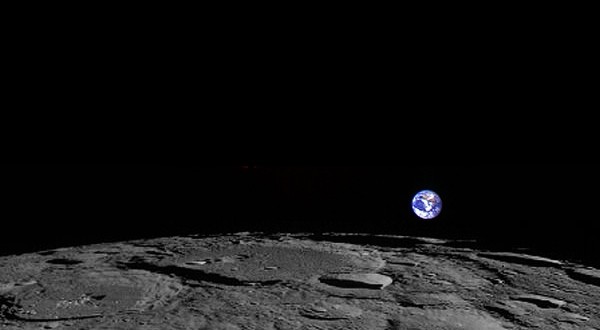 NASA’s lunar space probe has captured a beautiful image of the Earth rising above the edge of the moons surface, from a distance.

Made famous by the Apollo 8 mission of 1968, NASA’s Lunar Reconnaissance Orbiter was launched in 2009 to map the surface of the moon. The 2014 Earthrise picture was created by combining different images taken from various wavelengths by the orbiter’s Wide Angle Camera (LROC) on February 1, 2014.

LRO experiences 12 “earthrises” every day. However, it is always busy imaging the lunar surface and so an opportunity when the LRO can capture a view of the Earth arises rarely.

On February 1, the LRO pitched forward while approaching the Moon’s North Pole, allowing the LROC Wide Angle Camera to capture the Earth rising above Rozhdestvenskiy crater, 180 km in diametre.

In the photo, the Earth appears relatively brighter than the Moon and presents near true colours that the average person might see.

Web articles – via partners/network co-ordinators. This website and its contents are the exclusive property of ANGA Media Corporation . We appreciate your feedback and respond to every request. Please fill in the form or send us email to: [email protected]
Previous: NY State Senate’s yogurt debate ferments comedy punchlines
Next: Amazon accused of meddling with Hachette sales : Report