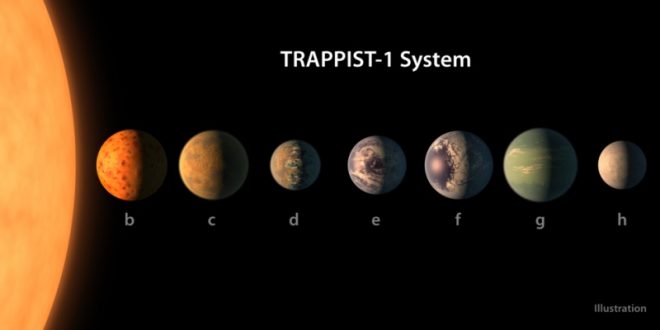 NASA has discovered seven planets with Earth-like qualities orbiting a nearby star making them among the strongest candidates in the continued search for extraterrestrial life among known exoplanets, or planets that exist outside of our own solar system.

“This is the first time that so many Earth-sized planets have been found around the same star,” says Michaël Gillon, an astronomer at the University of Liege, Belgium, who is lead author of a paper announcing the discovery today in Nature. Previously, he says, astronomers have found never found more than two or three such planets in a single system.

He adds that at least three of these planets are the right distance from their sun to have liquid water. Indeed, it is possible that all seven might host liquid water on at least parts of their surfaces, depending on the composition of their atmospheres.

The planets circle an ultra-cool dwarf star called TRAPPIST-1, located about 40 light years away. They were detected because their orbits periodically pass between us and the star, dimming its light by a small amount.

TRAPPIST-1 is a very tiny star, with a mass about 8% that of our sun. To put it in perspective, Gillon says, “If the sun is a basketball, then TRAPPIST-1 is a golf ball.”

It’s also very dim, producing far less light than our sun. But that’s still enough to keep its family warm, because they huddle so closely to it that the inner six planets’ orbits range from 1.51 days to 12.35 days. (The outermost orbit has not yet been fully determined, but is probably about 20 days, Gillon says.)

Among other things, this means that the planets are not only very close to their star, but are so close to each other that they are only a few million miles apart.

“If you were standing on the surface of one of these planets you would have a wonderful view,” Gillon says, noting that the other planets wouldn’t just be dots in the sky, but would appear as large or larger than the moon, with readily discernable features.

Because TRAPPIST-1 is so small, it doesn’t radiate a lot of visible light.

“It’s thousands of times brighter in the infrared than in the visible,” says Sean Carey, manager of NASA’s Spitzer Science Center at Caltech/IPAC, in Pasadena, California. But that made it ideal for study with the Spitzer Space Telescope, which is designed to measure infrared light.

Using Spitzer, scientists were able to take advantage of the planets’ close proximity to each other in order to observe how gravitational tugs between them produce variations in their orbits.

That’s important, because it allows astronomers to calculate each planet’s mass. By comparing that to their sizes (determined by the degree to which they dim the star’s light when passing in front of it) this makes it possible to calculate their densities. “From that we can tell if they are gaseous, rocky, or even [rich in] water,” Carey says.

“We have preliminary observations of the masses of six of the planets,” explains Gillon, who notes that the measurements indicate not only that these planets appear to be rocky, like Earth, but that one of them also appears to be rich in water.

The next step will be to measure more precisely how the seven atmospheres affect the light from TRAPPIST-1 as it passes through them on its way to us, then using that to look the spectroscopic fingerprints of important gases.

Already, says Nikole Lewis, an astronomer at the Space Telescope Science Institute in Baltimore, Maryland, scientists using the Hubble Space Telescope have determined that two of the innermost planets in the system do not have atmospheres dominated by hydrogen or helium. “That’s great, because that’s one more step along the path in having habitable worlds,” she says.

Eventually, Gallon says, the goal will be to measure levels of greenhouse gases in these planets, trying to figure out precisely what their surface temperatures might be.
“We will even search for gases that might be produced by life,” he says, “such as oxygen, ozone, methane and a whole host of others.” Getting precise measurements, however, may have to await the launch of NASA’s next-generation James Webb Space Telescope, presently scheduled for October 2018.

Meanwhile, there are things to be learned by continuing to study the planets’ orbits.

One interesting thing about these planets is that their orbits appear to be locked into resonances with each other — meaning their orbital periods form very simple numerical ratios. Such patterns, says Hal Levinson, a planetary scientist at the Southwest Research Institute in Boulder, Colorado, who was not part of the study team, are rare for exoplanet systems.

Gillon’s team says this means the planets orbits have shifted, indicating that they were born farther out from their sun and later migrated long distances inward. Levison doesn’t think that that long-distance migrations necessarily occurred, but he agrees that the resonance indicates that orbits have shifted. “Migrating a little bit, I think, has definitely happened,” he says.

Another thing that can be deduced from the planets’ orbits is that they probably lie so close to their star that they are tidally locked, meaning that one side will always face the star. Among other things, that means they could have a hot side, a cold side, and a temperate zone between the two.

Being that close their sun, Levison says, also means that they could experience fierce tidal heating and be extremely volcanically active. If so, that could also affect how habitable they are, he says.

Another problem that might be bad news for habitability, Levison adds, is that when they are young, stars like TRAPPIST-1 are very active and emit “a huge amount of X-rays.” If the planets were close to their present orbits at the time, that means they would have gotten “really baked.” Of course, he notes, “it is true they may not have been where we see them today.”

But whatever we eventually discover about it, he notes, “this is a cool system.”

Web articles – via partners/network co-ordinators. This website and its contents are the exclusive property of ANGA Media Corporation . We appreciate your feedback and respond to every request. Please fill in the form or send us email to: [email protected]
Previous: Life expectancy could soon exceed 90 years; says new study
Next: Eat ten fruit and vegetables a day and live longer, says new research