Home » Science » How Milkweeds Can Save Monarch Butterflies 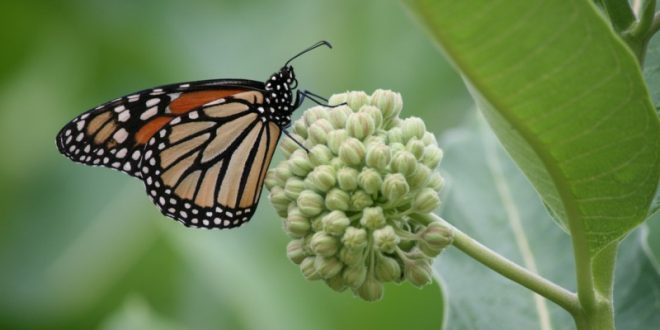 MilkweedWatch, an online platform to track the presence of milkweed throughout Canada, launched Monday Oct. 9 by a team of researchers at Wilfrid Laurier University and the University of Ottawa. The citizen science program will help Canadian scientists track milkweed, a plant that provides critical habitat for the endangered monarch butterfly.

Laurier researchers are asking Canadians to enter their observations of milkweed plants using the mobile friendly website milkweedwatch.ca. Milkweed plants are easily spotted in fall by looking for their distinctive seedpods that burst open to release hundreds of black seeds on silky parachutes.

Monarch butterflies, which migrate annually between Canada, the southern United States and Mexico, are an endangered species. One of the key reasons is a decline in the availability of milkweed along their migration routes, on which the butterflies lay eggs and monarch caterpillars feed. The aim of MilkweedWatch is to raise awareness about how critical milkweed plants are as a habitat for monarchs and other pollinator species, and to help gather data for Canadian scientists studying the relationship between milkweed and monarch population health.

MilkweedWatch was developed with support from Environment and Climate Change Canada and the non-profit organization Ontario Nature.

“Milkweed plants are key to the future survival of the monarch butterfly,” said Robert McLeman, associate professor in the Department of Geography and Environmental Studies at Laurier. “Milkweed is becoming increasingly scarce in many parts of North America due to the growing use of herbicides and land use change. We need the public’s help in tracking and preserving milkweed wherever it is found, and MilkweedWatch provides a simple way of doing so.”

Five different species of milkweed are commonly found across Canada. MilkweedWatch guides users with photos and plant descriptions, and collects observations through a user-friendly interface. Participants are also able to enter their observations, and learn about the lifecycle of monarchs and the relationship with milkweed.

“MilkweedWatch is a powerful tool for raising awareness about the ecological importance of the milkweed plant, and will encourage the general public to help conserve monarchs in a fun, easy way,” said Smera Sukumar, a conservation scientist with Ontario Nature. “Farmers and rural landowners can use it to track the health of pollinator patches on their land throughout the summer.”

MilkweedWatch is the fifth citizen science program launched under the NatureWatch project, operated by Laurier and the University of Ottawa in association with the David Suzuki Foundation and Nature Canada. It joins Frogwatch, Plantwatch, Icewatch and Wormwatch. McLeman has also led RinkWatch, a citizen science project that tracks the skating conditions of more than 1,400 Canadian outdoor rinks and ponds.

Web articles – via partners/network co-ordinators. This website and its contents are the exclusive property of ANGA Media Corporation . We appreciate your feedback and respond to every request. Please fill in the form or send us email to: [email protected]
Previous: myONE: company has invented custom ones in 60 sizes
Next: NASA Astronauts finally brought a fidget spinner into space (Watch)