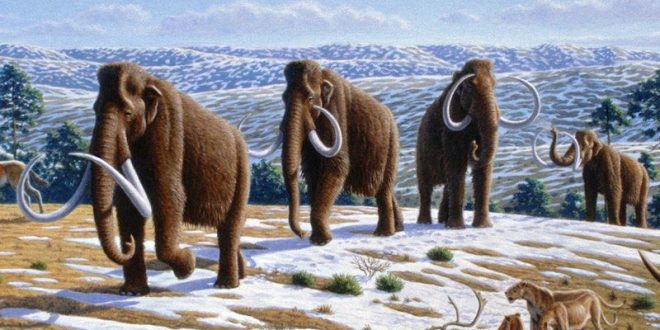 Male mammoths — much like male humans — were clumsy galoots who didn’t look where they walking and fell into holes, researchers have established.

Scientists led by Love Dalen of the Swedish Museum of Natural History in Stockholm set out to determine the gender of 98 sets of mammoth remains collected from various parts of Siberia. Unexpectedly, they found that most of them were male.

“Most bones, tusks, and teeth from mammoths and other Ice Age animals haven’t survived,” said Love Dalen of the Swedish Museum of Natural History. “It is highly likely that the remains that are found in Siberia these days have been preserved because they have been buried, and thus protected from weathering. The new findings imply that male mammoths more often died in a way that meant their remains were buried, perhaps by falling through lake ice in winter or getting stuck in bogs.”

“We were very surprised because there was no reason to expect a sex bias in the fossil record,” added Patrícia Pecnerova, the study’s first author, also at the Swedish Museum of Natural History. “Since the ratio of females to males was likely balanced at birth, we had to consider explanations that involved better preservation of male remains.”

The researchers made the discovery in the midst of a larger, long-term effort to examine the genomes of woolly mammoth populations. For some of the analyses, they needed to know the sex of individuals. They initially set out to determine the sex of a small number of mammoths. “It became apparent that we were finding an excess of male samples, which we found very interesting,” Dalen said.

They decided to sex more samples and to examine the sex ratio of individuals collected from the Siberian mainland and from Wrangel Island, off the coast. Overall, they found, males consistently outnumbered females among their samples.

The researchers say the findings suggest that woolly mammoths lived similarly to modern elephants, with herds of females and young elephants led by an experienced adult female. In contrast, they suspect that male mammoths, like elephants, more often lived in bachelor groups or alone and engaged in more risk-taking behavior.

“Without the benefit of living in a herd led by an experienced female, male mammoths may have had a higher risk of dying in natural traps such as bogs, crevices, and lakes,” Dalen said.

The findings highlight the utility of fossil remains for making inferences about the socioecology and behavior of extinct animals, the researchers say. At the same time, they are a reminder to researchers that fossil assemblages don’t necessarily represent a random sample of a population.

The researchers say they’ll continue to study woolly mammoth genomes and those of several other extinct Ice Age mammals. They’re curious to see whether they observe the same skewed sex ratio in other species.

Web articles – via partners/network co-ordinators. This website and its contents are the exclusive property of ANGA Media Corporation . We appreciate your feedback and respond to every request. Please fill in the form or send us email to: [email protected]
Previous: Heart Stents Fail to Ease Chest Pain, says new study
Next: New Mars 2020 rover will include twenty-three cameras