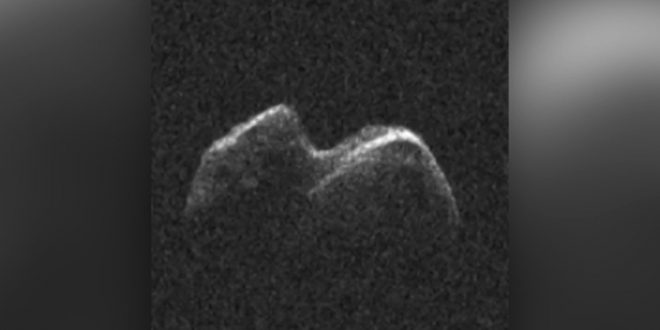 Largest asteroid to fly extremely close to the Earth (Photo)

Largest asteroid to fly extremely close to the Earth (Photo)

An asteroid over a kilometer across flew safely past the Earth. It was the largest asteroid to pass us in over a decade (the last one was Toutatis in 2004), and there are no known asteroids that size that will get as close for another decade.

Brad Tucker, an astronomer at the Australian National University, said: “This tells us how active space is – it’s not static. We are so used to hearing astronomers describing objects as light years away. Close encounters with asteroids are things that happen on a real time scale.”

This asteroid is called 2014-JO25 and nicknamed The Rock, and it will come closer to our planet than any other asteroid in the last 13 years.

Luckily for us, it will go past about 1.8 million kilometers away. The nickname “The Rock” is interesting because it reminds us of the famous actor Dwayne Johnson. Professor Tim Bedding, who is the chief of the school of physics at the University of Sydney, stated: “If an asteroid this size hit Earth, it would be catastrophic. If it hit an ocean, the tsunamis it would raise could wipe out coastal cities. If it hit land, it would be a different scenario but in both cases completely catastrophic.”

Tucker stated: “In the grand scheme of things, yes it is close because space is big. If it hit, its impact would be on the order of 10,000 megatons of TNT. Our real worry is not something a kilometer long, that’s easy to spot. We know where most of these are. Something much smaller, such as the one that exploded over Chelyabinsk in Russia three years ago is more of a threat. That could come out of nowhere. That was about 10 or 20 meters – and that can cause enough damage if it hits the right place. Those we know only a very few percent. We are still undoing all the damage that Armageddon did. Bruce Willis destroyed 10 years of science communication efforts in one poorly made movie. We’re just not going to have a rogue asteroid that comes out of nowhere to destroy the Earth.”

Web articles – via partners/network co-ordinators. This website and its contents are the exclusive property of ANGA Media Corporation . We appreciate your feedback and respond to every request. Please fill in the form or send us email to: [email protected]
Previous: American, Russian Blast Off To International Space Station (Video)
Next: Winnipeg scientists develop 1st new antibiotic in decades