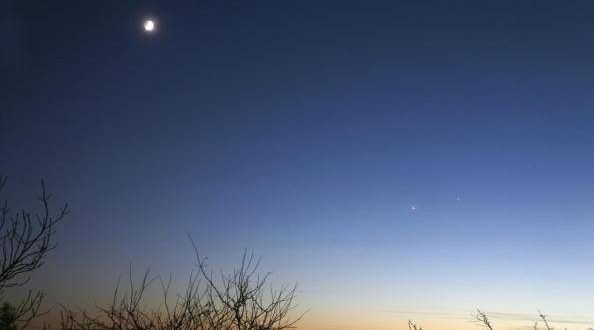 Jupiter and Venus visible to the naked eye (Video)

Jupiter and Venus visible to the naked eye (Watch)

People from across the world have witnessed both Jupiter and Venus appear near each other in Monday’s morning sky.

The two planets have been visible to the naked eye in US and countries in the mid-northern latitudes.

Their close proximity is known as the Venus and Jupiter Planet Conjunction.

The planets, which are the brightest to be seen from earth, put on a stunning display and were spotted by early morning sky-gazers.

The planets could be seen just above the horizon, and were at one point just 16 arcminutes (half the width of the full moon) apart from each other. People have shared pictures of the planets on social media. “That’s Jupiter and Venus by the way. How rare and beautiful it truly is that we exist,” said one person on Twitter.

“Only good thing about having to be out of the house before sunrise is getting to see Jupiter and Venus while I’m waiting for my bus,” said another.

Early risers around the world will be able to see #Venus and #Jupiter together in the pre-dawn sky early Monday and Tuesday. pic.twitter.com/3pwd2HHKxt

Web articles – via partners/network co-ordinators. This website and its contents are the exclusive property of ANGA Media Corporation . We appreciate your feedback and respond to every request. Please fill in the form or send us email to: [email protected]
Previous: Corvette unleashes the 2019 ZR1: The most powerful ‘Vette ever (Photo)
Next: Doomsday warning to humanity signed by 15000 scientists