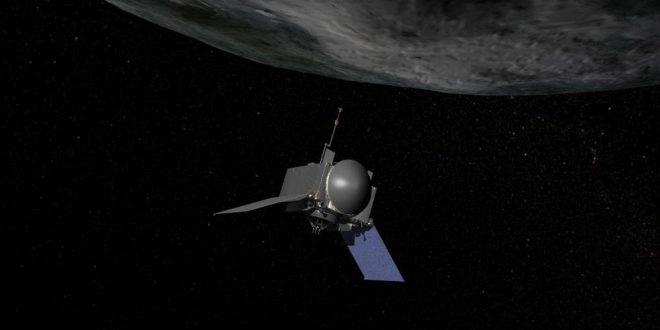 Johns Hopkins University Applied Physics Laboratory has been chosen to supply instruments to NASA for a pair of Discovery-class missions that aim to explore asteroids that might help scientists understand the earliest history of the solar system.

Lucy—named for the famous prehistoric human fossil—will launch in October 2021 to study six of Jupiter’s Trojan asteroids. Scientists say understanding the differences between the Trojans will provide unique and critical knowledge of planetary origins, the source of volatiles and organics on the terrestrial planets, and the evolution of the planetary system as a whole.

APL will provide the “eagle eyes” for the Lucy by developing a high-resolution telescopic camera for the mission, which will perform the first reconnaissance of the Trojans, a population of primitive asteroids orbiting in tandem with Jupiter.

The APL instrument is the next-gen version of the Long Range Reconnaissance Imager, or LORRI, currently flying on the New Horizons spacecraft, which provided the first detailed close-up views of Pluto and its moons in July 2015. Among other capabilities, the L’LORRI camera—the first “L” added to mark its role on the Lucy mission—will produce Lucy’s highest spatial resolution surface maps, which will allow scientists to chart the asteroids’ geology and estimate surface ages.

“Lucy is an exciting mission at the frontier of planetary science,” said APL’s Hal Weaver, the L’LORRI principal investigator. “We’re excited about the opportunity to provide a camera with proven heritage that will shed light on these critical links to the solar system’s early history.”

For Psyche, APL will provide the Psyche Gamma Ray and Neutron Spectrometer, called the GRNS, which will detect, measure, and map the elemental composition of 16 Psyche, a rare and primarily metal asteroid in the main asteroid belt between Mars and Jupiter. The instrument is based on the APL-developed GRNS flown on the successful Messenger Discovery-class mission.

Unlike most asteroids, which are made of rock and ices, 16 Psyche appears to be the exposed nickel-iron core of a protoplanet, one of the building blocks of the sun’s planetary system. GRNS will test this hypothesis by measuring 16 Psyche’s elemental composition, and if confirmed, these observations will be the first to directly characterize the composition of a planetary core and provide insights into the inaccessible cores of the terrestrial planets, including Earth and Mars.

“Psyche is one of the few remaining unexplored frontiers of our solar system,” said David Lawrence, the Psyche GRNS instrument and investigation lead. “The data returned by APL’s GRNS will be foundational for revealing the mysteries of this fascinating world. Our entire GRNS team is grateful to play a key role in this exciting mission.”

The Psyche mission will launch in 2023 and will arrive at the asteroid 16 Psyche in 2030. Arizona State University is the principal investigator institution; NASA’s Jet Propulsion Laboratory will build the spacecraft and manage the mission. The Lucy mission will fly by its targets between 2025 and 2033. Southwest Research Institute is the principal investigator institution and will lead the science investigation. NASA’s Goddard Space Flight Center will provide overall mission management, systems engineering, and safety and mission assurance.

Web articles – via partners/network co-ordinators. This website and its contents are the exclusive property of ANGA Media Corporation . We appreciate your feedback and respond to every request. Please fill in the form or send us email to: [email protected]
Previous: 2018 Mercedes-AMG GT C: More power and active aero for all!
Next: Cygnus constellation: Star predicted to explode in ‘2022’