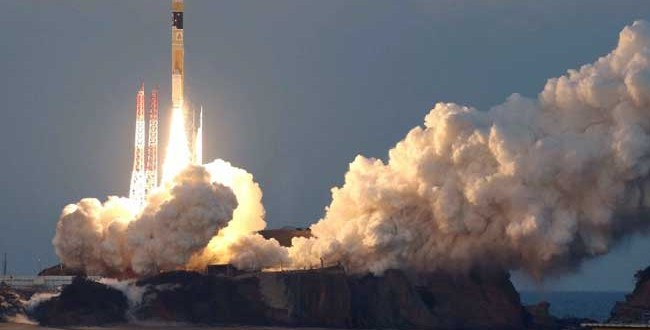 A Japanese rocket carrying the astronomy observation satellite ‘Hitomi’ launched from the Tanegashima Space Center in southern Japan on Wednesday. The satellite, also known as ‘ASTRO-H’ of the Japan Aerospace Exploration Agency (JAXA), is designed to detect a wide range of wavelengths, such as X-rays and gamma rays. Hitomi is to study the structure and evolution of the universe, as well as the formation and evolution of black holes.

The observatory will be the eye to the cosmic energy rays that permeate the universe, which is why ASTRO-H has been named “Hitomi” (“eye”), according to JAXA. “We wish ASTRO-H to be the essential mission to solve mysteries of the universe in X-rays. Hitomi refers to the aperture of the eye, the part where incoming light is absorbed,” JAXA wrote in a statement. “From this, Hitomi reminds us of a black hole. We will observe Hitomi in the Universe using the Hitomi satellite!”

ASTRO-H separated from the vehicle at 14 minutes and 15 seconds after liftoff. After the launch, the space agency confirmed the X-ray satellite deployed its solar array panels and is in good health. JAXA will provide an update on the orbit of ASTRO-H Thursday. ASTRO-H is the successor to Suzaku, JAXA’s X-ray observatory that launched in 2005.

The satellite is equipped with four instruments to observe “soft” X-rays and “soft” gamma rays that emit hundreds to hundreds of thousands of times the energy of visible light, according to NASA. X-rays are given off by high energy objects in the universe such as matter falling into a black hole or the strong gravitational pull of a group of galaxies.

“These energies arise in a variety of settings, including stellar explosions, extreme magnetic fields, or strong gravity, and X-rays let us probe aspects of these phenomena that are inaccessible by instruments observing at other wavelengths,” Robert Petre, chief of Goddard Space Flight Center’s X-ray Astrophysics Laboratory and the U.S. project scientist for ASTRO-H, said in a statement.

Web articles – via partners/network co-ordinators. This website and its contents are the exclusive property of ANGA Media Corporation . We appreciate your feedback and respond to every request. Please fill in the form or send us email to: [email protected]
Previous: Right gut bacteria may protect against malnutrition, says new Research
Next: Toyota recalls 2.87 million SUVs after Transport Canada discovers rear seatbelt defect