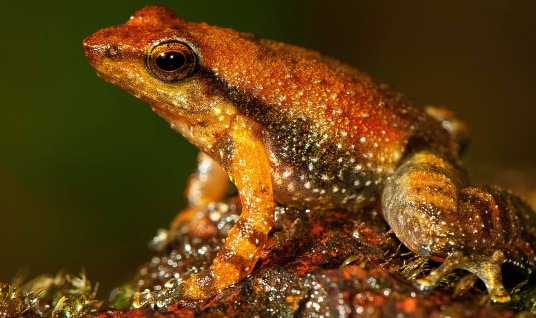 14 new species of dancing frogs were discovered in the Western Ghats of southern India by the scientists/biologists. These tiny acrobatic amphibians (frogs) were found by Indian biologists. The Indian Dancing frogs are scientifically known as Micrixalidae and their family comprises a single genus Micrixalus. Name of the species has been derived by their style of unusual kicks used to attract the mates.

Their study formally identifying the new species, published today in the Ceylon Journal of Science, more than doubles the number of known Indian dancing frog species to 24.

The frogs are found exclusively in the Western Ghats mountain range, but that habitat is rapidly shifting as a result of climate change.

Even in just the brief period that they have been analysed for the first time by scientists, numbers have dropped to around a fifth of what they were in 2006.

“On the one hand, we have brought these beautiful frogs into public knowledge. But about 80 per cent are outside protected areas, and in some places, it was as if nature itself was crying.”

The frogs are tiny and delicate, around the size of a walnut, so are only able to breed in a delicate window between monsoon storms that would wash them away and the point when streams dry up altogether.

Prof Biju said that over the course of the team’s observations forest soils appeared to lose moisture and streams that had run all year round went dry.

“Compared with other frogs, these are so sensitive to this habitat that any change might be devastating for them,” he said. “Back in 2006, we saw maybe 400 to 500 hopping around during the egg-laying season. But each year there were less, and in the end even if you worked very hard it was difficult to catch even 100.”

The tiny amphibious acrobats appear similar to others in Central America and Southeast Asia, but the Indian family, known by the scientific name Micrixalidae, evolved separately about 85 million years ago.

Only the males actually dance — in a unique breeding display called foot-flagging. They stretch, extend and whip their legs out to the side to draw the attention of females who might have trouble hearing mating croaks over the sound of water flowing through hill streams.

The dance is a show of power – the bigger the frog, the better the moves. Leg extensions are also used to smack away other males — vital given the unfavourable ratio for the amphibians is usually around 100 males to one female.

Their habitat, the Ghats, stretch 1,600 km (990 miles) from the western state of Maharashtra down to the country’s southern tip, but an Environment Ministry report in 2010 said the range was likely to be one the areas hardest-hit by changing rainfall patterns.

It’s forest have shrunk by at least 25 per cent, and the Ghats are now home to more than 325 of the world’s most threatened species of plants, birds, amphibians, reptiles and fish.

Many of the newly discovered frogs will soon be joining them, Prof Biju said. The majority of the species live only in a single, small area. Seven were in what Prof Biju described as “highly degraded” habitats where logging or new plantations were taking over, while another 12 species were in areas that appeared in ecological decline.

Prof Biju’s determination, or even obsession, with documenting as many new frog species as possible stems has earned him the nickname “Frogman” in India, and stems from his fear that many will vanish as “unnamed extinctions” before scientists ever learn they exist. Experts think Earth has about 8.7 million distinct plant and animal species, but they have documented only 1.5 million.

Amphibians are particularly vulnerable. At least one-third of the world’s known 6,000 frog species are threatened with extinction from habitat loss, pollution, changing temperatures or exotic diseases spread by invasive animals and pests, according to Global Wildlife Conservation.

Sonali Garg one of the study’s co-authors, said her family initially thought she was crazy for wanting to study frogs. “But slowly, they’re becoming aware of how important and special frogs are,“ she said. ”Slowly, I’m converting them.”

Web articles – via partners/network co-ordinators. This website and its contents are the exclusive property of ANGA Media Corporation . We appreciate your feedback and respond to every request. Please fill in the form or send us email to: [email protected]
Previous: Rare megamouth shark caught off Japan coast (Photo – Video)
Next: CDC : Syphilis cases on the rise in U.S. men