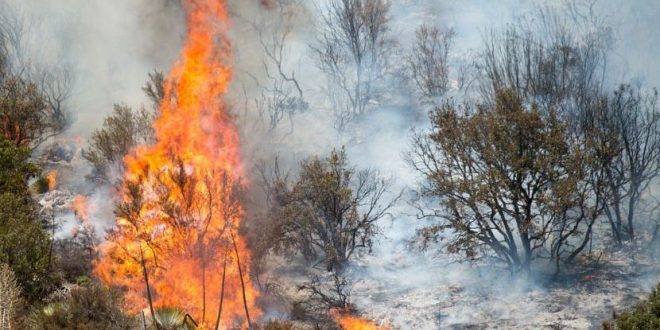 Humans Cause Most of America's Wildfires, Says New Study

Humans Cause Most of America’s Wildfires, Says New Study

The work, conducted by Bethany Bradley at the University of Massachusetts Amherst and Jennifer Balch of the University of Colorado-Boulder, looked at the ignition and effects of 1.5 million fires that sparked up between 1992 and 2012.

Not only were the vast majority of them caused by humans, the anthropogenic blazes accounted for 44% of the land burnt. What’s more, people had caused fires to break out in areas where there used to be few, if any, problems.

“Humans create sufficient ignition pressure for wetter fuels to burn,” the researchers write in the Proceedings of the National Academy of Sciences.

As well as extending the areas in which wildfires occur, the researchers’ information – drawn from the US Forest Service Fire Program Analysis Fire Occurrence Database – indicates that human-induced fires happen throughout the year, in contrast to lightning-caused blazes, which tend to be concentrated in a period of a few weeks during summer.

Balch and Bradley concluded that, on average, humans caused 40,000 wildfires in spring, winter and autumn every year.

Bradley notes that the increasing number of off-season fires represents a worrying interaction between human behavior and climate change.

“I think that’s interesting, and scary,” she says. “It suggests that as spring seasons get warmer and earlier due to climate change, human ignitions are putting us at increasing risk of some of the largest, most damaging wildfires.”

Web articles – via partners/network co-ordinators. This website and its contents are the exclusive property of ANGA Media Corporation . We appreciate your feedback and respond to every request. Please fill in the form or send us email to: [email protected]
Previous: Solar Probe Plus mission: NASA may send robotic spacecraft to Sun next year
Next: Second person dies in youth facility fire, Minor charged