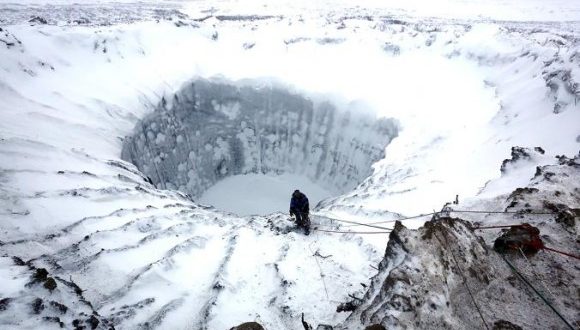 A huge, mysterious hole has been spotted in sea ice near Antarctica, researchers reported this week.

Holes in the ice are common enough that there’s a name for them: polynias, borrowed from the Russian word for water surrounded by sea ice. But this particular polynia is unique for two reasons. It’s very large, and it’s located far away from the warmer ocean water.

“This is hundreds of kilometers from the ice edge,” said atmospheric physicist Kent Moore to Motherboard. “If we didn’t have a satellite, we wouldn’t know it was there.”

Most polynias are easy to explain. They tend to form when a current of warm ocean water from underneath the ice melts a small amount, forming a region of no water. But this polynia is so far from the coast that it’s unlikely to have arisen in this way.

This particular polynia has also appeared in this location twice before, once last year and once in the 1970s. This means that whatever is causing it has some sort of repetitive nature, which could help scientists uncover what is happening.

And if scientists do figure out what is causing this particular polynia, it will shed some light on how Antarctica will change over the next few years. The continent is changing rapidly, with melting ice, collapsing glaciers, and awakening volcanoes making it difficult to predict where Antarctica is headed. Understanding what’s causing this polynia could help scientists put some of the pieces together.

Web articles – via partners/network co-ordinators. This website and its contents are the exclusive property of ANGA Media Corporation . We appreciate your feedback and respond to every request. Please fill in the form or send us email to: [email protected]
Previous: CarbFix: Scientists turn CO2 into rock to combat climate change
Next: myONE: company has invented custom ones in 60 sizes