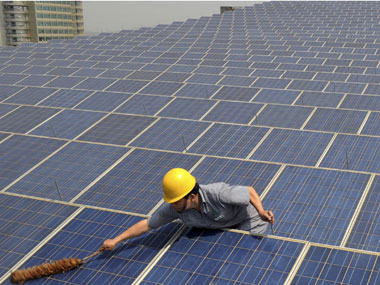 University of Oxford researchers have become successful in developing new high-efficiency solar cells at lower costs than at what they are currently manufactured. The trick that helped them achieve this is by replacing the lead by tin. lead in solar cells based on lead halide perovskites can be replaced with tin.

Called “Perovskite solar cells” by the research team at Oxford, these solar cells deliver 17% efficiency at turning sunlight into electricity and will be capable of generating solar energy over a large at cheap costs, if all goes well. Even though the amount of lead in each solar cell is tiny, its presence was a major obstacle in their commercialization.

In this new research the team looked at what could replace the lead currently used in perovskite solar cells to help them generate energy. Although the amount of lead in each cell is tiny, the presence of the metal could still be an issue when it comes to commercialisation, with firms looking at the entire lifecycle of perovskite solar cells products and their disposal.

In a paper to be published in the journal Energy & Environmental Science the researchers report that they have created the first lead-free perovskite solar cell – with non-toxic tin replacing lead in the cell’s absorbing layer.

‘We wanted to try and replace the lead with something similar but non-toxic. Tin has been reported in perovskites before, but not in a solar cell, so we decided to see if it would work,’ said Nakita Noel of Oxford University’s Department of Physics, first author of the paper. ‘We found that by using tin we managed to keep everything that is good about lead in a solar cell but use a metal that is safe, cheap, and abundant.’

The prototype cell achieved a 6% efficiency at turning sunlight into electricity but the team believes that in theory such cells could achieve much higher efficiencies, over 20%, as long as the material can be made more stable. If a stable version can be created, which the team are currently developing, it could provide an alternative that is as efficient as conventional silicon-based solar cells whilst being non-toxic, not requiring intensive energy input and be much cheaper and easier to mass produce.

‘The demonstration of solar cells using tin-based perovskites is a clear indication that good solar cell operation is not unique to lead, and therefore also opens up the use of other similar metals in the perovskite structure, leading to a multitude of new research avenues for optimising these materials,’ added team leader, Henry Snaith.

Because the prototype lead-free material degrades in the presence of oxygen and moisture, the tin-based cell had to be prepared and sealed in a nitrogen atmosphere. The researchers are confident that further work will enable them to create cells that can be manufactured and are stable, and can operate in air for long periods of time.

Web articles – via partners/network co-ordinators. This website and its contents are the exclusive property of ANGA Media Corporation . We appreciate your feedback and respond to every request. Please fill in the form or send us email to: [email protected]
Previous: Four-year old dies after car crash : State Police
Next: Social Media : Foursquare Splitting Service Into Two Apps