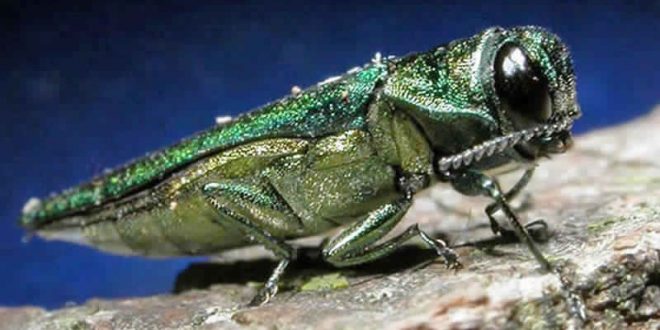 The green jewel beetle known as emerald ash borer has arrived in Philadelphia. This half-inch-long insect had destroyed over 100 million ash trees in Detroit in 2002. Currently, it is spotted in Philadelphia and threatens the ash trees of the city.

The Emerald Ash Borer is responsible for the destruction of tens of millions of ash trees in 27 states. Native to Asia, it likely arrived in the United States hidden in wood packing materials. The first U.S. identification of Emerald Ash Borer was in southeastern Michigan in 2002.

There are a variety of treatment options that can serve as a control measure for the EAB, but they are not a cure. Because pesticide regulations differ from State to State, homeowners should contact their State department of agriculture or local extension office for guidance.

The Philadelphia Inquirer reports Parks and Recreation officials in May set out traps in West Philadelphia and in the Northeast. In mid-June two traps caught several insects which were sent off for testing.

Parks and Recreation project manager Curtis Helm says officials suspected ash borers have been in the city, but this is the first physical proof.

He says unless steps are taken, the city will lose a majority of its ash trees in the next five to 10 years.

Web articles – via partners/network co-ordinators. This website and its contents are the exclusive property of ANGA Media Corporation . We appreciate your feedback and respond to every request. Please fill in the form or send us email to: [email protected]
Previous: Researchers discover a new type of eco-friendly ‘blue’ fire (Video)
Next: Shea Weber finally makes it to Montreal