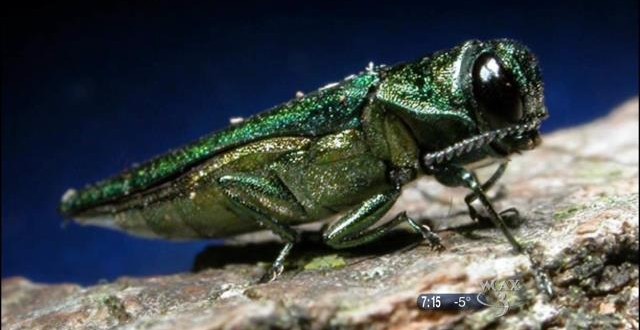 Emerald ash borer has appetite for other trees too, new study says

Emerald ash borer has appetite for other trees too, new study says

The emerald ash borer (Agrilus planipennis), also known as EAB, is an invasive insect pest from Asia that has killed millions of trees in the United States and Canada and has caused billions of dollars of damage since it was discovered in 2002. Fortunately, its damage has been limited to ash trees—or so we thought.

During the summer and fall of 2014, Dr. Don Cipollini, a professor at Wright State University, found evidence that the EAB can also attack white fringetree (Chionanthus virginicus), a species native to the southeastern United States that is planted ornamentally. His observations are described in an article published in the Journal of Economic Entomology called “White Fringetree as a Novel Larval Host for Emerald Ash Borer”.

“It appears that emerald ash borer is eating more than ash trees,” Cipollini said. “It may have a wider host range than we ever thought in the first place, or it is adapting to utilize new hosts. This biological invasion is having drastic ecological and economic consequences, and you can’t always predict what’s going to happen.”

The borers attack trees by laying eggs on the bark. The serpentine feeding galleries of the larvae inside the bark disrupt the flow of nutrients and water and starve the tree.

White fringetree, a relative of ash, is a deciduous shrub or small tree that can grow up to 30 feet tall. It has white flowers and a purple, olive-like fruit, and is growing in popularity as an ornamental. It is known for its relative lack of pest and disease problems, and until now has never been reported as a host to wood borers related to emerald ash borer.

Web articles – via partners/network co-ordinators. This website and its contents are the exclusive property of ANGA Media Corporation . We appreciate your feedback and respond to every request. Please fill in the form or send us email to: [email protected]
Previous: Avalanche Canada introduces public safety app, Report
Next: New clinic to bring back abortion services in Fredericton (Video)