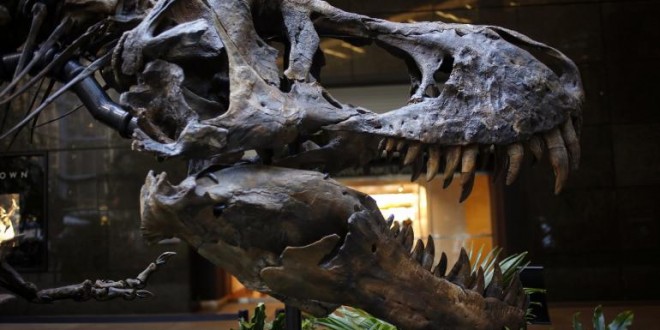 An auction in New York next week will see the sale of 17-metre fossilized skeletons of two dinosaurs. What makes those fossils interesting is the fact that they were locked in combat when they died and they are still in battle pose.

Thomas Lindgren, of auction house Bonhams, said both the dinosaurs killed each other and the pair is important from science’s point of view.

According to Reuters, the price for the Dueling Dinosaurs could set a record at the fossil auction. The North American fossils are estimated to fetch anywhere between $7 and $9 million. A Tyrannosaurs Rex skeleton named Sue is the current record holder for most expensive dinosaur fossil purchased at auction. Sue sold for $8.3 million in 1997.

“The November 19 auction contains nearly 80 lots, including several of the finest, most important fossils ever to come on the market,” noted Thomas Lindgren, Bonhams Co-Consulting Director of Natural History, in a statement. “Led by the unsurpassed Montana Dueling Dinosaurs, this auction is a once in a lifetime opportunity for institutions and collectors.”

However, LiveScience notes that the sale of the Dueling Dinosaurs may destroy their value to science. The science website points out that even legally obtained fossils are sometimes ignored by paleontologists when they’re placed on the auction block for big money.

Would you pay millions of dollars for a set of dinosaur fossils? Will the Dueling Dinosaurs become the most expensive dinosaur fossils ever sold at auction? Start conversation by sharing your thoughts and predictions in the comments section.

Web articles – via partners/network co-ordinators. This website and its contents are the exclusive property of ANGA Media Corporation . We appreciate your feedback and respond to every request. Please fill in the form or send us email to: [email protected]
Previous: Joe Biden Botox, Bald spot : Plastic surgery gone bad
Next: Matt Damon Ben Affleck, Whitey Bulger : Reports