Home » Science » This Dinosaur Had a ‘Bandit Mask’ Like a Raccoon, Researchers Say 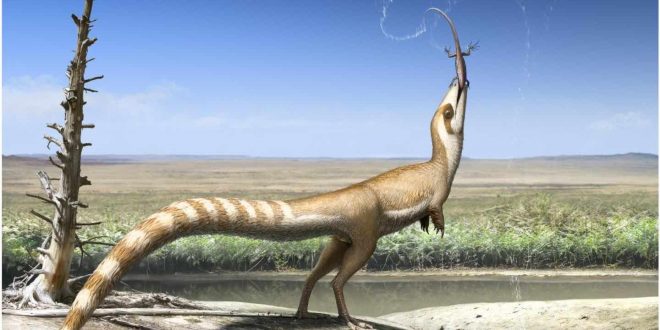 This Dinosaur Had a 'Bandit Mask' Like a Raccoon, Researchers Say

This Dinosaur Had a ‘Bandit Mask’ Like a Raccoon, Researchers Say

Researchers said this week that a “diminutive” dinosaur from China is the first to sport a so-called “bandit mask” pattern around its eyes, an evolutionary feature common in modern-day mammals and birds, including raccoons.

Sinosauropteryx prima first made a splash back in 1996 when it was unveiled as the first non-avian dinosaur to have plumage, with a defined line of fluff clearly visible along its neck and tail. Then, in 2010, paleontologists announced that they had recovered the ancient color pattern of this dinosaur from the distribution of pigment-carrying organelles in the fluff, its tail banded rust and white. Now a new study by University of Bristol paleontologist Jakob Vinther and colleagues has further refined our image of what this dinosaur was like in life.

“We thought that perhaps more information could be gleaned from taking high resolution images with crossed polarized light,” Vinther says—and that effort produced a new image, which could offer additional clues about how and where the cuddly-looking carnivore lived.

The new image of Sinosauropteryx is of an almost raccoon-like dinosaur. The restoration Vinther and colleagues have produced sports the familiar banded tail, visible just by looking at the fossil itself. But the dinosaur also appears to have an eye mask and a countershaded pattern on its body, with rust-colored protofeathers above and white fluff below.

This new pattern not only comes from what was preserved on a pair of exceptional Sinosauropteryx fossils, but what was not. Vinther and colleagues found preserved protofeathers around the dinosaurs’ eyes, chest, back and tail. Yet, the researchers argue, the dinosaur was probably even fluffier than a first glance would suggest. That’s because the protofeathers in those blank spots were unpigmented, Vinther and colleagues argue, and so they decayed while the red, pigmented protofeathers persisted thanks to their sturdier structure.

University of Maryland paleontologist Thomas Holtz urges some caution over this interpretation, however. While it’s possible that the bald spots on the fossils are places where white protofeathers were not preserved, Holtz points out the possibility that there could have been colored fluff there that was lost after death. “Decaying bodies can slough off outer layers in part or in whole,” Holtz says, “so I would be more cautious than they are about the ‘absence of evidence equals preserve of white’ hypothesis.” Still, Holtz says, “the reconstruction looks like a reasonable speculation of a living animal, so I wouldn’t be surprised if it turns out to be accurate.”

Restoring the color palette of long-deceased dinosaurs is about more than sending paleoartists back to their easels, though. Vinther and colleagues point out how dinosaur color might offer clues to dinosaur biology that would otherwise remain hidden. The bandit mask, Vinther says, is “a common pattern in birds and seems to either disguise the eye or reduce glare,” making it easier for them to see in bright habitats while also hiding their own eyes and making the bandits harder to see.

The color pattern of Sinosauropteryx might also tell us something about where this dinosaur liked to roam. Countershaded color patterns are a form of camouflage, and through light tests on 3D models the researchers propose that pattern on Sinosauropteryx best fits life in a more open habitat. This would have been a risky move. There were larger predatory dinosaurs running around the same clearings, making camouflage all the more important for little Sinosauropteryx as it darted through the low-lying vegetation.

Regarding the connection between camouflage and ecology, Holtz notes, there are animals with Sinosauropteryx-like color patterns alive today that prefer more forested habitats. Tree kangaroos show countershading, Holtz says, and the forest-dwelling raccoon dogs wear color patterns much like Sinosauropteryx. Furthermore, University of Ghent feather expert Matthew Shawkey says, the dinosaur’s striped tail might have been pretty conspicuous. “I imagine that this would stick out like a sore thumb even if the abdomen is camouflaged by countershading,” Shawkey says, especially if this pattern was meant as a signal for Sinosauropteryx to communicate with each other.

More work needs to be done on tying patterns to habitat preferences, Holtz says, with any hypothesis about a dinosaur’s habits checked against clues from geology, prehistoric plants and fossil pollen.

Still, by refining these connections, paleontologists may be able to pull back the paleontological curtain on lost worlds. Drawing from his previous research restoring the coloration of a small horned dinosaur called Psittacosaurus, Vinther points out that this small herbivore likely preferred more closed, forested habitats. This could mean that even though Sinosauropteryx and Psittacosaurus were neighbors, they may never have met each other. “Perhaps we can in the future say which herbivores and theropods out of the many found in Jehol actually interacted regularly and which rarely saw each other,” Vinther says.

“Integument plays a hugely significant role in the lives of living animals,” Holtz says, “so the more we learn of it in fossil species, the better we can begin to interpret their life.” This goes beyond the fossil record. Efforts like shading in Sinosauropteryx could spur zoologists to get a better idea of how color relates to behavior and ecology in modern animals, allowing researchers to draw parallels between the past and present.

The study appears in Current Biology.

Web articles – via partners/network co-ordinators. This website and its contents are the exclusive property of ANGA Media Corporation . We appreciate your feedback and respond to every request. Please fill in the form or send us email to: [email protected]
Previous: September 2017’s intense solar activity viewed from space
Next: Researchers compare twins’ DNA after one of them went to space