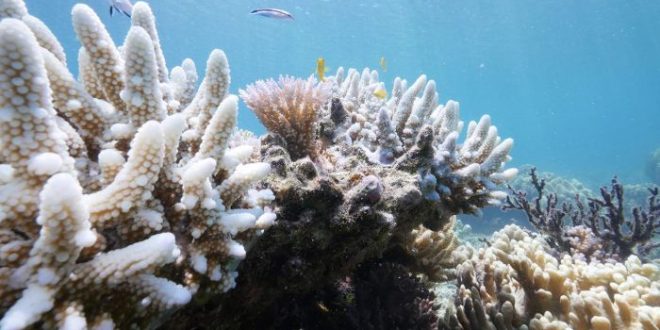 A report into the threats climate change poses to the natural wonder, to be released today by the Climate Council, has predicted that if severe bleaching continues, regions adjacent to the Reef stand to lose more than one million visitors annually.

This is equivalent to an estimated $1 billion in tourism spending and 10,000 jobs supported by the natural asset.

“That bleaching we now know is continuing into 2017 with extremely warm water causing particularly severe bleaching now in the middle sections of the reef, which of course is where most of the tourists visit,” she said.

“This will have enormous economic and employment consequences for Queensland.”

While the report noted cooler water brought on by Cyclone Debbie could offer some reprieve, it also said this may be offset by physical damage inflicted by the extreme weather.

It comes just days after aerial surveys showed mass coral bleaching had impacted most of the Great Barrier Reef.

The Australian Research Council’s Centre of Excellence for Coral Reef Studies on Monday confirmed that only the southern third of the reef had not been affected by consecutive bleaching events in 2016 and 2017.

The “extraordinary devastation” experienced on the reef was due to the warming of the oceans, driven by the burning of coal, oil and gas, Prof Hughes said ahead of the report’s release.

“It would have been virtually impossible for this to have occurred without climate change,” she said.

The loss of coral reefs across the globe could cost $1 trillion, the council says, stressing it’s an economic as well as an ecological problem.

The World Heritage-listed Great Barrier Reef is worth $7 billion annually and supports the livelihoods of 69,000 Australians employed in sectors such as tourism, the report states.

Web articles – via partners/network co-ordinators. This website and its contents are the exclusive property of ANGA Media Corporation . We appreciate your feedback and respond to every request. Please fill in the form or send us email to: [email protected]
Previous: Vancouver police ‘apologize profusely’ for dog attack on 87-year-old woman
Next: Kamloops: Hotel robbed by man with gun (Picture)