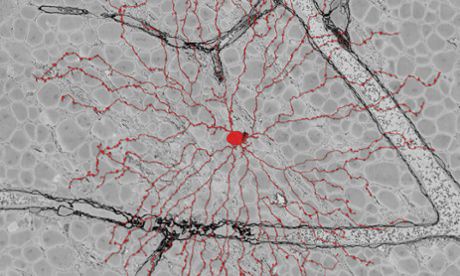 Researchers have traced how cells in our retina track objects that move across our field of vision, thanks in part to thousands of video gamers.

The findings, published online Sunday by the journal Nature, validate a concept that explains how some nerve cells are stimulated only by motion in a specific direction and not in other directions. They also validate the use of video games, crowdsourcing and the other tools of citizen science for making rigorous scientific discoveries.

It is sometimes said that we see with the brain rather than the eyes, but this is not entirely true. People can only make sense of visual information once it has been interpreted by the brain, but some of this information is processed partly by neurons in the retina. In particular, 50 years ago researchers discovered that the mammalian retina is sensitive to the direction and speed of moving images. This showed that motion perception begins in the retina, but researchers struggled to explain how.

When light enters the eye, it is captured by photoreceptor cells, which convert the information into electrical impulses and transmit them to deeper layers of the retina. Individual photoreceptors are not sensitive to the direction in which an object may be moving, so neuroscientist Jinseop Kim, of the Massachusetts Institute of Technology (MIT) in Cambridge, and his colleagues wanted to test whether the answer to the puzzle could lie in the way various types of cells in the retina are connected.

Photoreceptors relay their signals via ‘bipolar neurons’, named this way because they have two stems that jut out of the cell’s body in opposite directions. The signal then transits through ‘starburst amacrine cells’ — which have filaments, or dendrites, that extend in all directions similarly to light rays out of a star — before reaching the cells that form the optic nerve, which relays them into the brain.

To understand how bipolar and starburst cells are wired together, Kim and his colleagues analyzed high-resolution electron microscope images of a mouse retina with the help of nearly 2,200 members of EyeWire, an online ‘citizen-science’ game set up to help with brain-mapping efforts (see ‘Computer science: The learning machines’). Players traced the pathways through the layers of cells to create a high-resolution wiring diagram of part of the retina.

Web articles – via partners/network co-ordinators. This website and its contents are the exclusive property of ANGA Media Corporation . We appreciate your feedback and respond to every request. Please fill in the form or send us email to: [email protected]
Previous: Few kids receive dental care before first birthday, Study
Next: I-15 bridge collapse : Damage from freeway bridge fire hits $10m