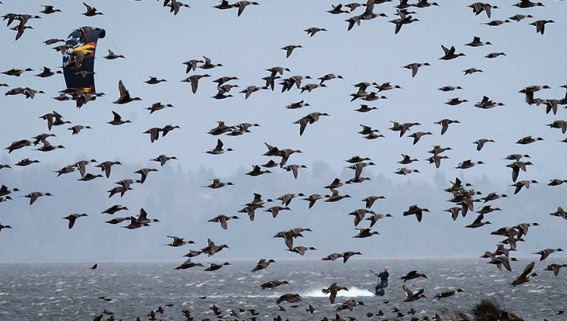 After a seven-year-long investigation, scientists at the National Audubon Society issued a grim report Monday finding that more than half of the 650 or so bird species in North America may be threatened by global warming. Many species, including the bald eagle and piping plover, are likely to become extinct if rising global temperatures are not abated.

“It is alarming,” said Jim Shallow of Audubon Vermont. “We are seeing that over 300 species of bird are projected to be threatened or at risk of extinction from climate change.”

Audubon spent seven years analyzing 30 years of North American climate data and tens of thousands of historical bird observations to understand the links between where birds live and the climatic conditions that support them.

“I think there is 60 percent of Vermonters watch birds, feed birds and they love their birds. And this should be a call to action– what they see at their feeder now may not look the same in 20 or 30 years,” Shallow said.

Isaac Wood-Lewis, 8, is a big bird fan. He recently volunteered to help band birds and collect important data about them.

“We were banding birds like putting little bands on their legs and doing all sorts of cool things with the birds,” he said. “Well, to make the world a better place and help the animals on it.”

Isaac and his family from Burlington are also taking part in the People’s Climate March Sept. 21 in New York City.

“The People’s Climate March in New York City is the largest climate action that has ever been planned, expecting 300,000 people before the climate committee at the UN is meeting to talk about climate change,” said Valerie Wood-Lewis, Isaac’s mom.

Hundreds of Vermonters, like others from across the country, will board buses bound for New York City. Isaac’s older brother, Henry, is looking forward to the trip.

“I want to go to help the Earth and the animals like Isaac said, and like march with everybody else, obviously going to be a lot of people going,” Henry said.

Audubon Vermont has several ongoing programs to boost bird populations. There are things we can do in Vermont to help the birds, in fact Audubon has been working with landowners to protect bird habitat from forests to fields. That includes the Bobolink Project, paying farmers to delay haymaking by a couple of weeks, allowing the bobolinks the chance to raise their young.

But Audubon also continues to look at the big picture– what is happening to bird migration patterns, which are changing rapidly.

“It is global warming, it is what is driving this, in all the effects that come along with all of this carbon we are pumping into our atmosphere, our climate is warming, our weather patterns are shifting and that’s having an impact on the birds and ultimately will have an impact on us as people,” Shallow said.

Audubon hopes their new report will be an environmental wake-up call, similar to the movement in the 1960s to ban the chemical DDT, sparked by Rachael Carson’s book, “Silent Spring,” and also be part of an effort to force countries around the world to reduce the amount of carbon in the atmosphere.

Web articles – via partners/network co-ordinators. This website and its contents are the exclusive property of ANGA Media Corporation . We appreciate your feedback and respond to every request. Please fill in the form or send us email to: [email protected]
Previous: Wearable robot will put a spring in soldiers’ steps (Video)
Next: Mould discovery closes Science and Technology Museum, Report