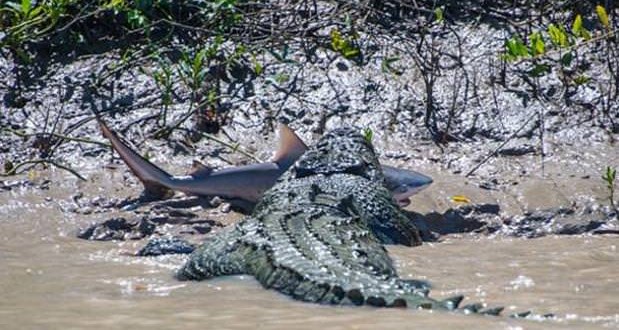 Crocodile And Shark Fight To Death In Australia

Tourists exploring the Adelaide River in north Australia were left shocked after witnessing a massive 5.5 metre saltwater crocodile – known locally as Brutus – sink its teeth into a ferocious bull shark.

‘The tour guide had Brutus jumping at some meat the first time we went past him. Brutus is quite well known up here… he jumps really high for an old crocodile,’ he told Daily Mail Australia.

Paice says they passed by Brutus and noticed something in his mouth. The tour guide backed the boat up and that’s when they noticed the shark in the croc’s teeth wiggling around. He says shortly afterwards, Brutus swam off into the mangroves to devour his prey.

Web articles – via partners/network co-ordinators. This website and its contents are the exclusive property of ANGA Media Corporation . We appreciate your feedback and respond to every request. Please fill in the form or send us email to: [email protected]
Previous: Six arrested for drunk driving in Essex County : OPP
Next: Health, engineering degrees have best return : Report