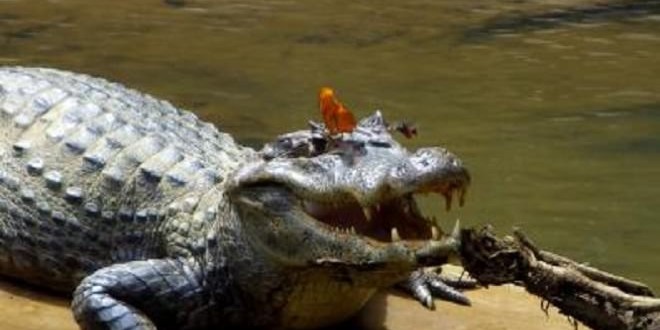 Butterflies and bees have found an unlikely source of nutrients in the tears of crocodiles lazing on the banks of the Río Puerto Viejo in northeastern Costa Rica.

Aquatic ecologist Carlos de la Rosa spotted the phenomenon while passing the crocodiles on a boat travelling along the river.

De la Rosa photographed the insects drinking the tears of a spectacled caiman, with the insects fluttering around the predator as it basked in the sunshine.

“It was one of those natural history moments that you long to see up close,” said de la Rosa, director at the Organisation for Tropical Field Studies in San Pedro, Costa Rica.

Though bountiful in the ocean, salt is often a rare and valuable resource on land, especially for vegetarians.

It is not uncommon to see butterflies sipping mineral-laden water from mud puddles.

When minerals are rare in the soil, animals sometimes gather salt and other rare minerals and proteins from sweat, tears, urine, and even blood.

“Those are the kinds of things that, you know, you do not plan for them, you cannot plan for them,” de la Rosa said in a peer-reviewed letter appeared in the journal Frontiers in Ecology and the Environment.

Web articles – via partners/network co-ordinators. This website and its contents are the exclusive property of ANGA Media Corporation . We appreciate your feedback and respond to every request. Please fill in the form or send us email to: [email protected]
Previous: Canada’s Exploding Whale Probably Won’t Explode (Video)
Next: Lack of vitamin D ‘linked to prostate cancer’, study says