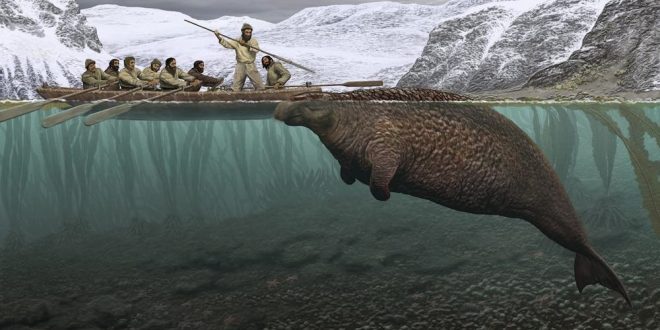 An ancient sea monster hunted to extinction has been discovered on a remote Russian island.

The headless remains of a Steller’s sea cow were found by nature reserve officials on the far flung Commander Islands in the Bering Sea.

The 20-foot (six-metre) long beast died out in the 18th century because they were sitting targets for harpoon hunters, having no fear of humans.

Ribs of the creature were found jutting out of the seashore like a ‘fence’.

An eight hour dig showed that this was a rare find of the existence sea cow, once endemic to the waters of these islands between Russia and Alaska.

They found 45 vertebrae, 27 ribs, a left scapula and other bones on the headless creature.

The Steller’s sea cow (Hydrodamalis gigas) was a large sirenian mammal, which grew up to 10 metres long and weighed between 6 and 8 tonnes. It was discovered in 1741 near the Asiatic coast of the Bering Sea by German biologist Georg Steller, who was travelling with the explorer Vitus Bering. Just 28 years later, the species was extinct. It is the first recorded example of humans driving a marine species to extinction.

Nature reserve inspector Maria Shitova spotted the protruding ribs of the skeleton which will be displayed on the islands.

The huge animals belonged to a group of mammals known as Sirenia, named after the mermaids of Greek mythology.

‘According to the fossil record, animals in the genus Hydrodamalis inhabited coastal waterways from Japan through the Aleutian Island chain to Baja California during the Late Miocene, Pliocene, and Pleistocene’, according to researchers from George Mason University writing in Biology Letters.

‘According to historical records, by the eighteenth century the species had declined to remnant populations around only Bering and Copper Islands, Russia’, researchers wrote.

Web articles – via partners/network co-ordinators. This website and its contents are the exclusive property of ANGA Media Corporation . We appreciate your feedback and respond to every request. Please fill in the form or send us email to: [email protected]
Previous: Dog ownership linked to lower mortality, says new study
Next: Moon landing filmed in studio? Video of Astronaut’s visor “proves” NASA staged Apollo mission