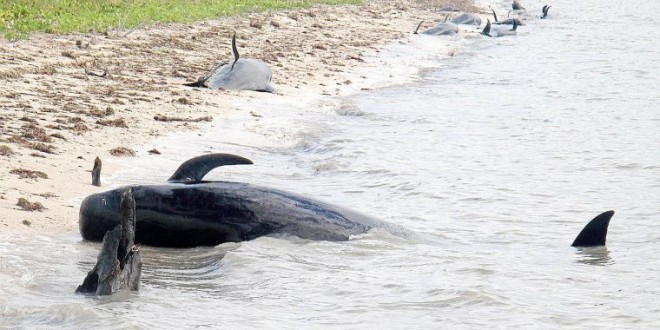 About 30 pilot whales were stuck in shallow waters Wednesday off Everglades National Park, according to Florida media reports.

At least four died among nine whales that beached themselves overnight, The Miami Herald reported. The others were freed alive and returned to the pod, which remained in danger.

“It’s so shallow at low tide for such a long distance it makes it more difficult to get the whales to an area where they can swim away,” Friar said.

It’s not unusual for the whales to end up in the shallow waters, which stretch for hundreds of yards, Friar said.

“The thing about these whales, as the day heats up they’ll have to keep them wet,” she said.

The Florida Fish and Wildlife Conservation Commission is assisting the rangers and NOAA in the rescue effort.

“The agencies are coming together to do what they can,” Friar said.

NOAA Marine Mammal Scientist Blair Mase said people need to be “realistic about the options for these animals.

“Euthanasia might be the most humane option. The animals could be compromised,” Mase said.

The Gulf of Mexico has a very strong pilot whale population and this pod is very far from where they normally would be. They are very far from their deep water habitat and this makes it difficult for rescuers to “push” them back out to sea, Mase said.

“If we did push the healthy ones out, if they see one dead one they will come back again,” Mase said.

Friar said researchers would perform necropsies on the dead whales to try to determine what brought them there.

The last mass stranding happened in 1995, Mase said. Pilot whales are susceptible to strandings because they are tight knit.

Web articles – via partners/network co-ordinators. This website and its contents are the exclusive property of ANGA Media Corporation . We appreciate your feedback and respond to every request. Please fill in the form or send us email to: [email protected]
Previous: Kristen Stewart, Robert Pattinson have their rekindled romance (PHOTO)
Next: Singer Britney Spears on kissing Ryan Gosling and Justin Timberlake in the Mickey Mouse (VIDEO)