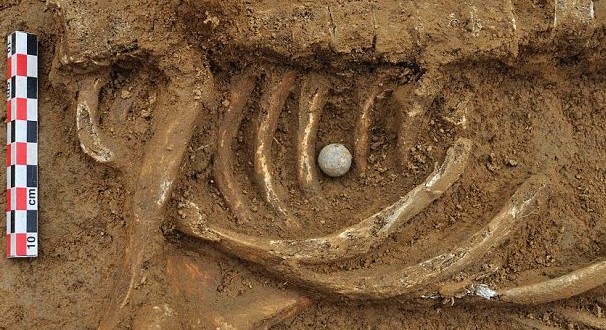 A “UNIQUE” 200-year-old skeleton discovered beneath a car park at the battlefield of Waterloo has been identified as a hunchback Hanoverian trained in the East Sussex resort of Bexhill-on-Sea.

The soldier has been identified as Friedrich Brandt, 23, a member of the King’s German Legion of George III, killed by Napoleon’s troops with a musket ball between his ribs.

Dominique Bosquet, an archeologist working for the Walloon government in Belgium who supervised its recovery, said: “It is unique. No other complete skeleton has been retrieved [from Waterloo] in 200 years.”

Scientists identified a curvature of the spine but that didn’t deter the man who Mr Glover believes was fighting for Britain to help liberate parts of his homeland that had been occupied by Napolean.

He said: ‘He suffered from a curvature of the spine which meant he probably would have been rejected from any modern army in the world.’

The soldier was unearthed in 2012 when a mechanical digger excavated an overspill car park near the Lion’s Mound, a well-known area to those who have visited the historic battleground south of Brussels.

Tens of thousands of men were killed in the famous battle, 200 years ago on June 18, but Cardiff-based Mr Glover thinks he knows why it was such a rare find.

He said: ‘Bone was considered a great fertiliser in the 1830s and 40s, so companies would raid former Napoleonic battlefields to collect the bodies of fallen soldiers and horses which would then be ground down and sold on to farmers.

‘Dead bodies weren’t thought of in the same way back then. Unless you were very wealthy, you were thrown in a mass grave and people didn’t think much of it.

‘It did eventually stop in the 1860s after a Yorkshire newspaper ran a campaign criticising farmers, highlighting that they were throwing the bodies of their relatives on the fields.’

The skeleton was found with a piece of wood bearing what was believed to be the initials CB, 20 coins in German and French money, believed to be equivalent to a month’s wages, and an iron spoon, reports The Sunday Times.

Scientists concluded he was aged between 20 and 29 but tests on his uniform which the team at Waterloo had hoped would reveal which unit he was in failed to reveal the information they needed to identify him.

In an academic article due to be published next month, Bosquet writes that the Waterloo soldier will ‘remain an anonymous victim of this bloody conflict’, reports The Sunday Times.

Web articles – via partners/network co-ordinators. This website and its contents are the exclusive property of ANGA Media Corporation . We appreciate your feedback and respond to every request. Please fill in the form or send us email to: [email protected]
Previous: Former Canadian warship HMCS Annapolis finally sunk as artificial reef (Video)
Next: Brawl over daiquiri lines? Massive Brawl At Resorts World Casino In Queens Go Viral