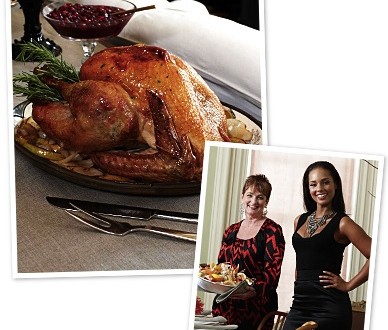 Alicia Keys and Mom Terria Joseph's Turkey in a Bag

Alicia Keys and Mom Terria Joseph’s Turkey in a Bag

Posted by: News Dec 7, 2013 in Press Releases Leave a comment

Barely out of her teens, singer, songwriter and classically trained pianist Alicia Keys stormed the pop charts in the early 2000s with a mature-beyond-her-age mix of soul, jazz and hip-hop. Thanks to an extra push from an appearance on Oprah the day before its release, her debut Songs in A Minor (Number One, 2001) sold 235,000 copies in its first week. By the end of the year it had produced two Top 10 singles — “Fallin’ ” (Number One) and “A Woman’s Worth” (Number Seven) — and was still red hot. Keys wound up taking home five trophies at the following year’s Grammy ceremony, including Best New Artist, Best R&B Album and Best R&B song. Songs in A Minor went on to sell platinum six times over.

Other Materials:
A large roasting pan, a meat thermometer, and a turkey-size oven bag (available in the paper-goods section of the supermarket).

1.preheat oven to 350°F. 2 Remove neck and giblets. 3 Rinse turkey with cold water inside and out, then rub with vinegar. Pat dry with paper towels. 4 Rub skin with garlic cloves, then butter. 5 In a bowl, mix garlic powder, paprika, salt, pepper and basil. Rub half of spice mix under skin, on breast and back. Tuck two sprigs of rosemary and one bay leaf under breast skin and two rosemary sprigs under back. Rub outside skin with remaining spice mix. 6 Stuff turkey with two chopped apples, one chopped onion, and three bay leaves. 7 Rub inside of oven bag with flour to prevent bag from bursting. 8 Add some of remaining chopped onions and apples to oven bag and leave some in the roasting pan, outside of bag, to use as garnish later. 9 Place turkey, breast side up, on onions and apples in oven bag. Cut six ½-inch slits into bag to allow steam to escape. Tie bag closed with provided tie or butcher’s string. Place bag into roasting pan. 10 Cook in oven for 2½–3 hours. Pierce bag with meat thermometer, and poke into thickest part of inner thigh. The turkey is ready when it reaches 180°F. 11 Cut open top of bag, and carefully remove turkey. Discard vegetables. Place turkey on serving dish and let rest for 20 minutes. Garnish with roasted apples and onions. Serves 8

Web articles – via partners/network co-ordinators. This website and its contents are the exclusive property of ANGA Media Corporation . We appreciate your feedback and respond to every request. Please fill in the form or send us email to: [email protected]
Previous: Samantha Harris : recipe for Hanukkah Star Cookies
Next: Christina Hendricks : Rub-All-Over-Your-Body Cornbread Stuffing recipe