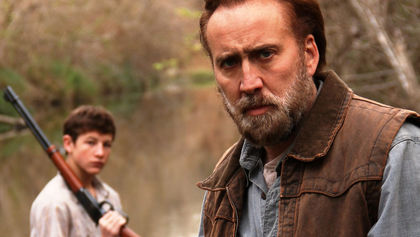 “Joe” is the movie that will make you remember how good Nicolas Cage once was and can be again.

A Southern Gothic tale of alcohol, violence, sin and redemption, this David Gordon Green film gives Cage his finest showcase in years. A harbinger of better things to come, now that he’s hit 50? Probably not. But it’s good to see he still has his curve ball.

Joe takes place in a small Texas town where a troubled alcoholic (Nicolas Cage) who manages a deforestation crew reluctantly takes an abused young boy (Tye Sheridan) under his wing. Tensions build, boiling points are reached…. You know the deal.

Unfortunately, Green’s time in Hollywood has calcified his storytelling sense. Languid takes and quiet character development are nice, but Joe has a plot to play out from A to B to C, and it does so in a rigidly schematic manner, with clear good guys and bad guys and innocent children to be rescued from the monsters.

It’s Sling Blade without the subtlety, or Mud (which also featured Sheridan as a resourceful teen bonding with a troubled man) without the texture. That said, Cage’s commitment to his role – and his insistence on playing it in a minor key – pulls things along admirably.

Web articles – via partners/network co-ordinators. This website and its contents are the exclusive property of ANGA Media Corporation . We appreciate your feedback and respond to every request. Please fill in the form or send us email to: [email protected]
Previous: BC Health workers OK strike mandate
Next: Seattle mayor unveils plan for $15 minimum wage (Video)