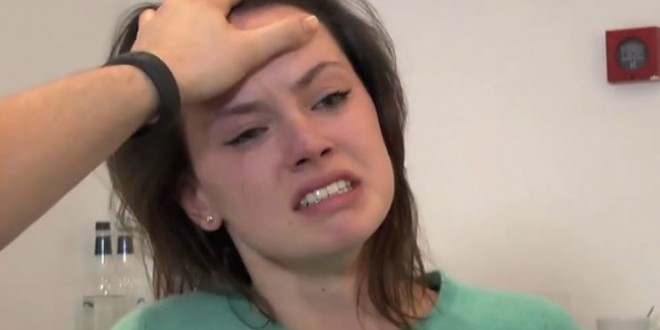 In a video set to feature on the upcoming DVD/Blu-ray release of Star Wars: The Force Awakens, director JJ Abrams explains how Daisy Ridley came to snatch the part of Rey.

‘What we were looking for was someone new,’ JJ Abrams explains in the clip. ‘This character needed to be vulnerable and tough, sweet and terrified. And to find someone that no one knew could do all these things took a lot of looking.

‘It wasn’t until we found Daisy that we just felt like she was capable of doing all of these things this character required.’

‘When we brought her in, I asked her to do this one scene, a torture scene, and she just blew my mind,’ he added.

The audition pulls from the excellent scene where Kylo Ren attempts to read the Rey character’s mind, but struggles due to her overwhelming untapped strength with the force.

Her performance in the clip doesn’t look too dissimilar compared to the final film, as she absolutely nails piling on the waterworks and a struggling, tortured grimace.

Basically, she’s a bit of a boss. But we knew that already, didn’t we?

Star Wars: The Force Awakens releases on DVD & Blu-ray in the UK on April 18th.

Web articles – via partners/network co-ordinators. This website and its contents are the exclusive property of ANGA Media Corporation . We appreciate your feedback and respond to every request. Please fill in the form or send us email to: [email protected]
Previous: FBI Agrees to Unlock iPhone in Arkansas Case; Report
Next: Mohawk the lion shot to death in Kenya, sparks outrage “Photo”