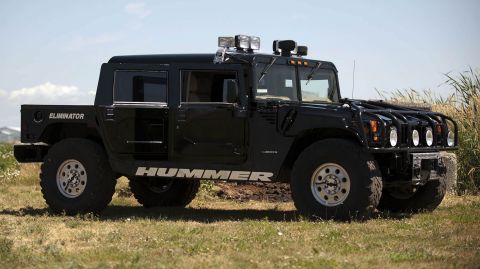 Less than a month before he was murdered in Sept. 1996, rapper Tupac Shakur had purchased a black 1996 Hummer H1 hardtop pickup. Earlier this month, it was sold during RR Auction’s Marvels of Modern Music online auction for $337,144.

Like any self-respecting Hummer H1 owner, Shakur wasn’t going to let this one go unpersonalized.

Additional features, according to RR Auctions, the auction company that sold the Hummer, include:

Included with the vehicle: a license plate, “YAKNPAK,” honoring Shakur and late rapper Yaki ‘Prince’ Kadafi; and promotional cassettes for Michael Jackson’s Thriller and 2Pac’s All Eyez on Me.

Accompanied by two copies of the vehicle’s registration information, listing Shakur as the original owner of the vehicle, as well as a copy of the affidavit for transfer, stating that “Tupac A. Shakur, the owner of the above described vehicle or vessel died on September 13, 1996 in Las Vegas, Nevada,” and listing Afeni Shakur, the artist’s mother, as property successor.

Much like Pac’s catalogue, this Hummer is also going straight through the roof in value. Back in 2007 it sold for a mere $200,000, so the extra $137,144 could probably just buy you another H1 to replace this one. It’s unclear who’s bought it this time, but it’s clearly someone with both wealth and taste.

The most recent listing claims the Hummer has only 10,100 miles on the clock. This is strange, because the number of miles on it went down from 2007, when it had 14,000 miles on it. Indeed, Makaveli is a man of many mysteries.

Web articles – via partners/network co-ordinators. This website and its contents are the exclusive property of ANGA Media Corporation . We appreciate your feedback and respond to every request. Please fill in the form or send us email to: [email protected]
Previous: Kalamazoo: Jason Dalton bound over to trial following wild outburst in court (Video)
Next: Nick Menza: “Former Megadeth drummer” dies after collapsing on stage