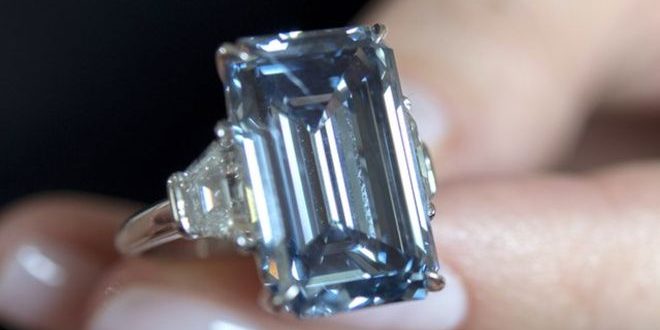 A big diamond known as the Oppenheimer Blue has set a new auction record, reaching a price of $50.6m.

The Oppenheimer Blue, at 14.62 carats, was estimated to be worth as much as $46m. The stone now belongs to a private collector after a 25-minute battle between bidders on three continents, Christie’s said after Wednesday’s sale.

The gem is named after its previous owner, Sir Philip Oppenheimer, whose family controlled De Beers for 80 years before selling out.

Blue diamonds are the rarest in the world.

The world’s biggest and scarcest diamonds have been resilient to the recent slump in prices.

The auction market for gems has been stronger than for art lately. Last week’s bellwether impressionist, modern, postwar and contemporary art auctions at Christie’s, Sotheby’s and Phillips in New York raised 50% less than last year.

The sale of the Oppenheimer Blue follows a record-breaking $175m jewellery auction by Sotheby’s in Geneva on Tuesday.

Prices for rough diamonds — what mined gems are called before they’re cut and polished – slumped 18% last year, the most since the financial crisis.

Web articles – via partners/network co-ordinators. This website and its contents are the exclusive property of ANGA Media Corporation . We appreciate your feedback and respond to every request. Please fill in the form or send us email to: [email protected]
Previous: Father of Michael Jackson, Joe Jackson responds to “stupid false” death rumours
Next: Stolen letter describing columbus voyage is returned to Italy after discovery in US, Report