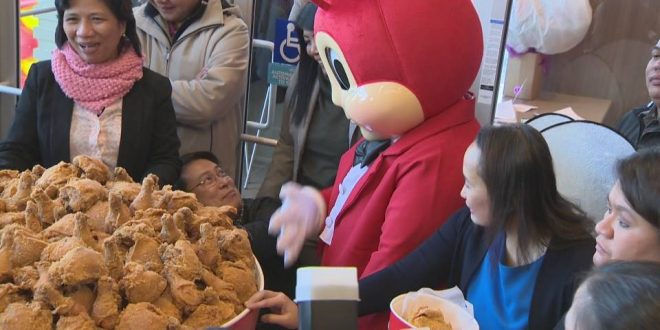 Jollibee, known as the “McDonald’s of the Philippines,” will open its first Canadian store in the city on Thursday.

Jollibee is famous for its signature crispylicious and juicylicious fried chicken, which is delicately breaded to be crispy on the outside, and its secret marinade makes it juicy inside. Kids love the Jolly Spaghetti’s signature sweet-style sauce, loaded with slices of savory ham, ground meat, and hotdog, while the Peach Mango Pie, with its sweet and flaky golden brown crust, has become a classic favorite.

On the store’s opening day, the brand is expecting thousands of customers lining up even before the sun rises. The anticipation is now seen on social media as locals share their photos by the signage of Jollibee expressing excitement on the arrival of the famed restaurant.

“The Jollibee family is incredibly excited to break ground in Canada to serve the thousands of Filipino-Canadians and Jollibee fans alike. It has been a joy to see the happiness families experience when visiting our locations in the USA and we are thrilled to now bring that same feeling into Canada at such a festive time like this,” said Jose Miñana, Jollibee Foods Corporation’s Group President for North America and Foreign Franchise Brands. “There is nothing we love more than serving the favorite delectable dishes of Jollibee fans to more communities, bringing families together for great tasting food, happy moments, and the warm and friendly service that Jollibee has come to be known for.”

Jollibee Winnipeg marks the 1st store in Canada and the 35th store in North America—evidence of the brand’s commitment to expand in North America as its key growth market. In 2017, it plans to open three more stores in Canada at Winnipeg Northgate, Scarborough, and Mississauga, then in Edmonton in 2018. In addition to these, it is also set to open in Jacksonville with the first store for the state of Florida, and the very first store in Manhattan, New York.

“Winnipeg is a fitting choice for Jollibee’s first Canadian store because it has largest density of Filipinos to the total population of the city. Every Filipino wants to be reminded of the taste of home, especially during Christmas, and I think there is no other fast food brand out there that can deliver that but Jollibee,” shared Maribeth dela Cruz, Vice President and General Manager for Jollibee Foods Corporation North America.

JFC is currently ranked as the largest Asian restaurant company in market capitalization, operating in 12 markets, with a total of 3,236 stores globally, of which 1,111 are Jollibee brand stores. The company’s aggressive expansion plan in North America is part of its overarching goal to be among the top five quick service restaurant brands globally by the year 2020.

Web articles – via partners/network co-ordinators. This website and its contents are the exclusive property of ANGA Media Corporation . We appreciate your feedback and respond to every request. Please fill in the form or send us email to: [email protected]
Previous: Videos of the last supermoon of 2016
Next: Vitamin D deficiency during pregnancy linked to autism, Says New Study