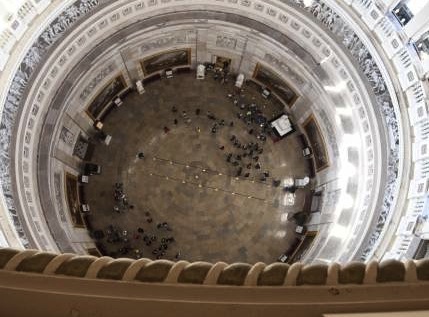 While climbing the 349 stairs winding between the Crypt and the top of the Capitol Dome, the water leaks that Architect of the Capitol Stephen Ayers aims to halt are evident.

Pausing about 90 feet above the marble floor of the Rotunda, one can take stock of the light water stains discoloring the walls below the frescoed band, or “frieze,” and the rust-colored grime atop the ledges peeking out over the rails.

Kevin Hildebrand, head of the AOC’s Architecture Division, pointed out the spots on Thursday, suggesting that the heavily cracked cast-iron Dome constructed more than 150 years ago is “like having a bridge as the roof of your building.”

The project will be hugely complicated.

The dome is 290 feet high and weighs 14.1 million pounds. Workers will remove up to 13 layers of lead-based paint before they can reseal, prime and repaint the gleaming white structure.

Cast iron will be repaired and reinforced. Many elements — such as floral decorations and cracked columns — will be removed and fixed.

The project is complicated by the dome’s height, elaborate decoration and age. The dome has not had major repairs since the 1959-60 restoration.

“The foundry practices in the 1850s and 1860s aren’t as controlled as they are today,” said Kevin Hildebrand, head of the Capitol’s architecture division.

Scaffolding must be lit because much of the renovation will take place at night to avoid disrupting congressional sessions.

Inside the soaring dome, workers will hang a doughnut-shaped safety net that won’t obstruct the view of the “Apotheosis of Washington” fresco on the ceiling from the rotunda. The fresco, which took a year to paint, has sustained some water damage, Ayers said.

Hildebrand said a “defunct” bird-proofing system — wires painted white — will be removed and replaced with a modern system.

Web articles – via partners/network co-ordinators. This website and its contents are the exclusive property of ANGA Media Corporation . We appreciate your feedback and respond to every request. Please fill in the form or send us email to: [email protected]
Previous: Star Michael Jordan relists mansion for $16M
Next: Deadlines Approach for Health Insurance Enrollment, Reports