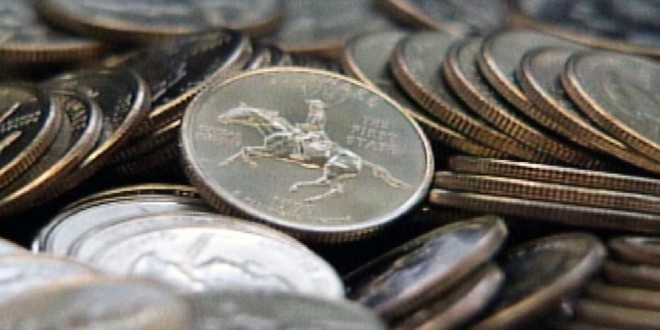 A former Brink’s employee is facing a bank theft charge after being accused of taking $200,000 worth of quarters in early 2014.

According to the Department of Justice, the 49-year-old man from Alabama is accused of taking the coins while he was working as a money processing manager.

“What [the suspect] may have thought was a nickel and dime theft was, in the end, the equivalent of a major bank heist,” FBI Special Agent Roger C. Stanton said in the DOJ’s news release.

According to an FBI investigation, the man had replaced the coins with beads in ballistic bags that belong to the Federal Reserve Coin Inventory. An audit in 2014 showed that four bags contained beads and only $1,000 in quarters — with the coins placed so they were visible through a window in the neck of each bag.

He’s agreed to plead guilty and repay Brink’s, which already paid the the Federal Reserve Bank of Atlanta, the coins’ owner, back for the incident.

“This defendant may have thought he had quite a haul but now he carries a heavier load,” U.S. Attorney Joyce White Vance said in the news release. “He must repay the money and face a federal sentence.”

Web articles – via partners/network co-ordinators. This website and its contents are the exclusive property of ANGA Media Corporation . We appreciate your feedback and respond to every request. Please fill in the form or send us email to: [email protected]
Previous: Men, women, and children attend rally for more midwifery support
Next: Two homeless men from Saskatchewan arrive in Vancouver to media frenzy