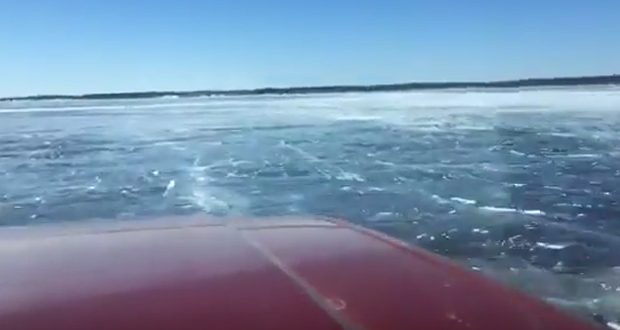 Two people are lucky to be alive after their truck fell through the ice while they were attempting to drive across Lake Winnipeg Tuesday afternoon.

Manitoba RCMP said the incident happened at 1:30 p.m. Tuesday. They received a call that a truck had gone through the ice on the lake near Hecla, Man.

Emergency crews arrived to find a man and a woman on the shore. Police said they had been driving across the lake in a truck when the ice broke, and the truck began to go through.

Police said the pair was cold, but not soaking wet when they arrived. They were offered medical attention, but declined.

RCMP said they didn’t know what happened to the truck.

In the video, a camera on a dashboard captured a vehicle crossing a frozen lake. Seconds into the video, the vehicle appears to break through the ice.

Occupants in the vehicle screamed, and are then heard scrambling to exit the vehicle.