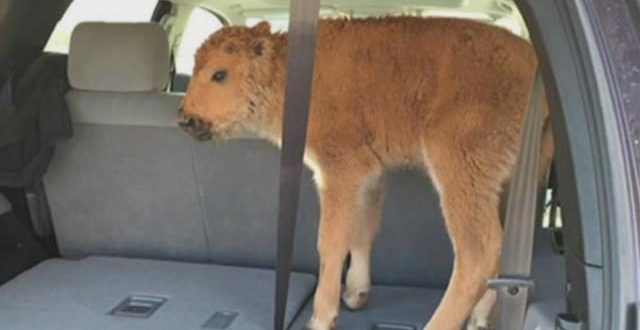 Tourist who put Yellowstone bison calf in SUV gets probation

Tourist who put Yellowstone bison calf in SUV gets probation

A tourist received six months of probation after pleading guilty Thursday to putting a bison calf in his car at Yellowstone National Park because he thought the animal was cold.

The calf later had to be euthanized because it couldn’t be reunited with its herd.

Court records show Shamash Kassam of Quebec entered a guilty plea over the telephone on Thursday to a wildlife violation.

U.S. Magistrate Mark L. Carman ordered the penalties, which include a $200 fine and a $500 payment to the Yellowstone Park Foundation Wildlife Protection Fund.

A criminal complaint states that Kassam came across the bison calf on May 9 and put it in his vehicle out of concern for its welfare.

Wildlife officials across the country almost always encourage people who have attempted a rescue to return the animals exactly where they found them, because mothers are likely to return to their offspring after searching for food or hiding from predators. People are also told to put the animals in a nearby area if they are at risk of being attacked by a pet.

People are also encouraged to use gloves while handling the animals and avoid hugging them to prevent their “human scent” from transferring, which could be a giveaway to predators.

Web articles – via partners/network co-ordinators. This website and its contents are the exclusive property of ANGA Media Corporation . We appreciate your feedback and respond to every request. Please fill in the form or send us email to: [email protected]
Previous: Mark Winston: Bee expert at The Bookshelf on Friday
Next: Phoenix mother fatally stabs three young sons, turns knife on herself