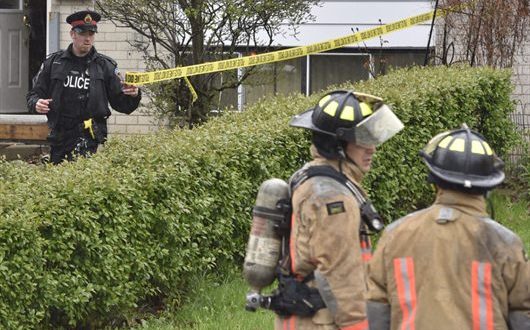 A three-year-old boy has died after a house fire broke out in a row of semidetached homes in Hamilton on Monday morning.

Firefighters were called to a semi-detached house at 240 Golden Orchard Dr. shortly after 10 a.m.

Crews arrived to find flames shooting from the basement window and were told a young child was still inside the house.

The child’s mother was taken to St. Joseph’s Healthcare Hamilton.

Brandon Jolly, who lives in the adjoining home, said the mother was cooking upstairs and noticed smoke. Jolly said she then came outside screaming that she couldn’t get to her child downstairs.

An investigator with the Ontario Fire Marshall’s office has been called in to investigate the cause and origin of the fire.

Web articles – via partners/network co-ordinators. This website and its contents are the exclusive property of ANGA Media Corporation . We appreciate your feedback and respond to every request. Please fill in the form or send us email to: [email protected]
Previous: Scientist demonstrates how time travel could theoretically occur
Next: Whirling disease in Oldman watershed, CFIA