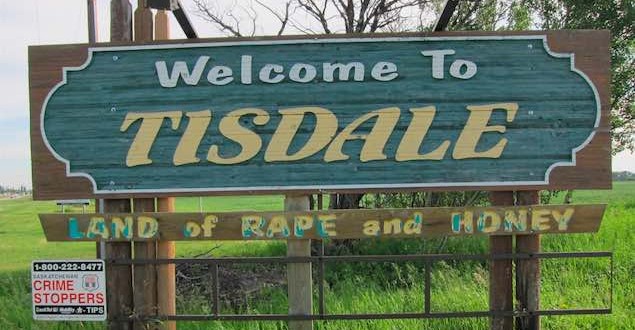 Tisdale, Saskatchewan, rethinks its 'Land of Rape and Honey' slogan

Tisdale, Saskatchewan, rethinks its ‘Land of Rape and Honey’ slogan

The Town of Tisdale’s slogan has generated snickers and stares, indifferent shoulder shrugs and passionate complaints for well over a half-century.

The community is now questioning whether it should reconsider calling itself “The land of rape and honey.”

The town office is asking all the community’s 3,200 residents to fill out a survey on whetherthe town should re-think the slogan, which has been criticized for its possible misinterpretation in relation to sexual assault.

In the town’s slogan, ‘rape’ refers to rapeseed, whose oil was once used as a machine lubricant. Rapeseed also covers a wide variety of seed, including canola.

The slogan received some international attention in 1988 when industrial heavy metal band Ministry named its third album and a song The Land of Rape and Honey. The band chose the name for the album after seeing the slogan on a souvenir mug.

The town is also asking businesses if they feel comfortable putting the town’s slogan on their business cards.

The survey suggests some alternative slogans:

– Hub of the Northeast

– A Place to Grow

– Land of Canola and Honey

Hoping to get as many surveys filled out as they can, the town is drawing prizes at the end of the survey period. Prizes include a gas barbecue, $100 credit to water bills, and Co-op gift cards. Five lucky winners will walk away with the book on Tisdale – A Story of the Century.

Web articles – via partners/network co-ordinators. This website and its contents are the exclusive property of ANGA Media Corporation . We appreciate your feedback and respond to every request. Please fill in the form or send us email to: [email protected]
Previous: Vancouver based BroadbandTV acquires YoBoHo, Report
Next: Sia performs in tinsel headpiece after misplacing wig (Video)