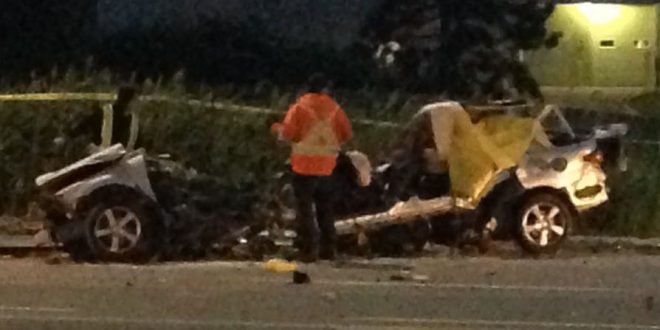 It happened just before 11 p.m. Sunday on Winston Churchill Blvd. between North Service Rd. and the QEW.

Two boys, aged four and 12, traveling in a vehicle with three other passengers were transported to hospital but later died. An adult male who was the lone driver of the other vehicle was pronounced dead at the scene.

Two adults, a man and woman and a seven-year-old girl were injured in the crash and taken to hospital. One of the adults remains in critical condition.

Peel police are asking anyone who may have witnessed this crash to contact them or Crime Stoppers.

Winston Churchill was closed between the QEW and North Sheridan Way, but has since reopened.

Web articles – via partners/network co-ordinators. This website and its contents are the exclusive property of ANGA Media Corporation . We appreciate your feedback and respond to every request. Please fill in the form or send us email to: [email protected]
Previous: Scientists create insulators for long lasting electronics (research)
Next: Hacktivist group Says NASA Is About to Announce Evidence of Alien Life