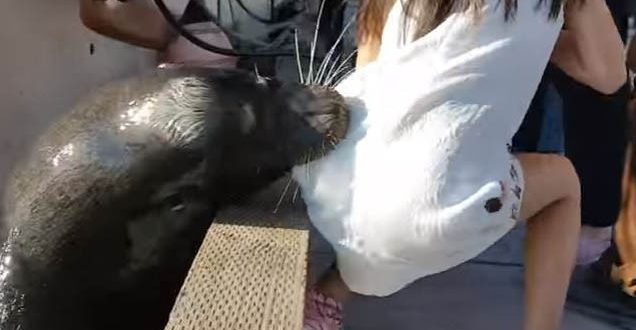 A man quickly rescued a little girl after a sea lion grabbed the back of the child’s dress and yanked her off a dock in a Vancouver, British Columbia suburb.

In the viral video, posted to YouTube by Richmond resident Michael Fujiwara, the California sea lion swims up to Steveston Fisherman’s Wharf in Richmond, a Vancouver suburb, then approaches a young girl leaning over a low railing over the water. The girl sits on the railing, and the sea lion lunges up, snatches her dress in its mouth and pulls her backward into the water.

Amid screams and cries of “Oh my God,” a man jumps into the water and pulls the girl to safety without further interference from the sea lion. Fujiwara says in his description of the video that no one was injured in the incident.

“The sea lion actually attracted a lot of attention from the visitors there, including the young girl,” Fujiwara told The Vancouver Sun. “She and her family, I guess, they came, they started feeding the animal bread crumbs or whatever it was, and then I guess the animal got a little too comfortable.”

Fujiwara’s YouTube video of the incident has been viewed more than 846,000 times since he posted it Saturday, though his “killer sea lion” label caused some consternation. His Twitter post with the video has been retweeted more than 480 times.

Web articles – via partners/network co-ordinators. This website and its contents are the exclusive property of ANGA Media Corporation . We appreciate your feedback and respond to every request. Please fill in the form or send us email to: [email protected]
Previous: Titan’s surface is more like MARS, not Earth, says new research
Next: World’s ‘Doomsday’ seed vault has been breached by climate change, Report