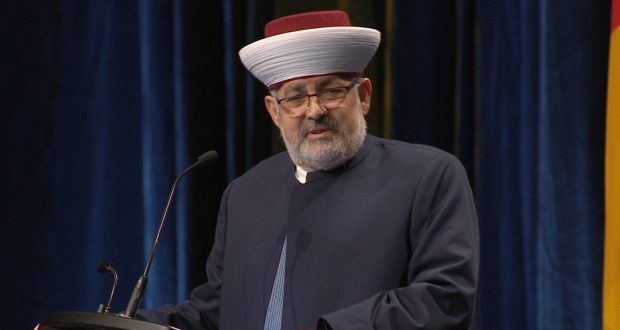 Nearly a week after 27-year-old French Canadian Alexandre Bissonnette stormed into a Quebec City mosque and shot and killed six worshippers, a funeral was held for several of the victims at a local convention center. Imam Hassan Guillet gave an address in English during the service that was attended by Canadian Prime Minister Justin Trudeau.

“We are here to celebrate Khaled, Aboubaker, Abdelkrim, Azzedine, Mamadou, Ibrahima,” Guillet said. “We are going to have a prayer for those who could not finish their prayers. We pray for them.

“Did I go through the complete list of victims? No,” he continued. “There is one victim. None of us want [to] talk about him. But given my age, I have the courage to say it. This victim, his name is Alexandre Bissonnette.”

“Alexandre, before being a killer he was a victim himself,” Guillet said to mourners gathered the funeral, including Canadian Prime Minister Justin Trudeau. “Before planting his bullets in the heads of his victims, somebody planted ideas more dangerous than the bullets in his head.”

This little kid didn’t wake up in the morning and say, ‘Hey guys, instead of going to have a picnic or watching the Canadiens, I will go kill some people in the mosque.’ It doesn’t happen that way.

“Let us face it. Alexandre Bissonnette didn’t start from a vacuum,” Guillet said. “For political reasons, and what is happening the Middle East and unfortunately, for ignorance, a lot of things happened. This guy was empoisoned.”

Guillet also issued a call for change: To turn enemies into friends through human connections, helping them to understand Islam is a peaceful religion.

Web articles – via partners/network co-ordinators. This website and its contents are the exclusive property of ANGA Media Corporation . We appreciate your feedback and respond to every request. Please fill in the form or send us email to: [email protected]
Previous: Cave Squeaker Frog Seen for the First Time in More Than 50 Years
Next: NASA’s Juno Completes Its Fourth Flyby of Jupiter (Watch)