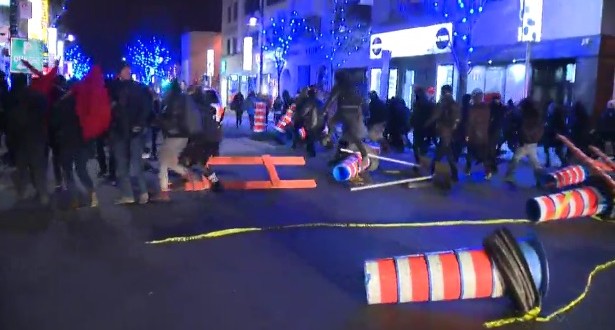 At least eight people were arrested following an anti-capitalist protest last night, a demonstration that police declared illegal before it even began because organizers did not provide them with a route.

The protest starting at the park on Berri St. and made its way east. Police and protesters exchanged rounds of fireworks and tear gas, mainly in the .

Many of the protesters wore scarves and had sticks and rocks.

Police corralled them into zones blocked off with police cars as the marchers zigzagged through the street.

Protesters chanted that they were at war with capitalism and some were carrying red communist flags.

Two protesters were treated for minor injuries and police said at least one of their cruisers had its windshield broken.

Many of those arrested will be fined under Montreal’s P6 bylaw, which gives police the authority to declare a protest illegal if it doesn’t pre-approve a parade route by the event’s organizers.

Web articles – via partners/network co-ordinators. This website and its contents are the exclusive property of ANGA Media Corporation . We appreciate your feedback and respond to every request. Please fill in the form or send us email to: [email protected]
Previous: California mum sentenced in killing of infant in microwave
Next: South Edmonton armed robberies leave two Mac’s workers dead, Report