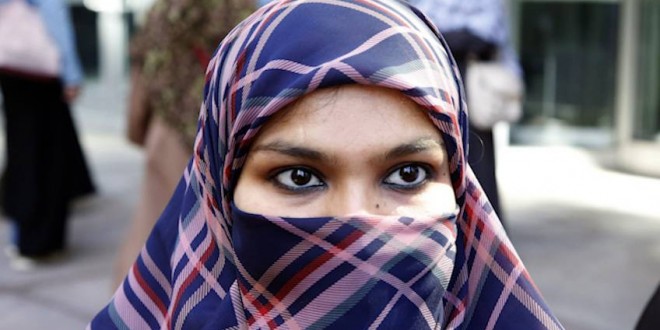 The highly charged issue of face coverings worn by would-be Canadians at citizenship ceremonies was thrust into the election campaign when the Conservatives challenged a recent court decision quashing the so-called niqab ban.

On Wednesday the government announced its plans to appeal yet another court decision that tosses out the ban on face veils from citizenship oath ceremonies.

Earlier in the week the Federal Court of Appeal upheld a decision that stems from Zunera Ishaq’s challenge of the Conservative’s 2011 ban.

But on Friday the government announced that in addition to its appeal it will seek a stay on the court’s decision. In other words, Ishaq and other Muslim women who believe it’s their religious duty to wear the niqab will have to wait until the entire court process is over until they can don the garment at a ceremony.

Since the Conservatives want to take this all the way to the Supreme Court, that could take years.

In a recklessly biased bit of journalism, the Canadian Press began its story on this development with the line: “The Conservatives are seeking to throw up another roadblock to a Muslim woman’s quest to be able to vote in October.”

Ishaq, her lawyer explained, wants to vote on Oct. 19. She can’t vote until she takes the oath.

But the government isn’t throwing up a roadblock to her voting. She is. Ishaq’s not being denied citizenship. That’s all finished. She just needs to show up at the ceremony, briefly taking off the veil, to be done with it.

The impediment is one of her own choosing. Many Muslim women don’t wear face veils. Many even oppose them — such as Raheel Raza and Farzana Hassan, who have written their opinions on the matter in Sun columns.

This isn’t a barrier. A barrier is, for example, if citizenship ceremonies were only held in inaccessible spaces where people with mobility issues couldn’t access. Nobody chooses to have a disability. But people choose their religion and choose which variation of that religion to follow.

If you choose one with rules that conflict with fairly reasonable conventions — such as showing your face in important social situations — then that’s your problem.

“When you join the Canadian family in a public citizenship ceremony it is essential that that is a time when you reveal yourselves to Canadians and that is something widely supported by Canadians,” Stephen Harper said at a campaign event Friday in Calgary.

He’s right that polls have consistently shown a majority of Canadians support his position. No wonder the government is prepared to take it to the Supreme Court.

Web articles – via partners/network co-ordinators. This website and its contents are the exclusive property of ANGA Media Corporation . We appreciate your feedback and respond to every request. Please fill in the form or send us email to: [email protected]
Previous: Denise Huskins: Vallejo kidnap victim, boyfriend to file legal claim against city
Next: Five injured after two stabbings in Scarborough