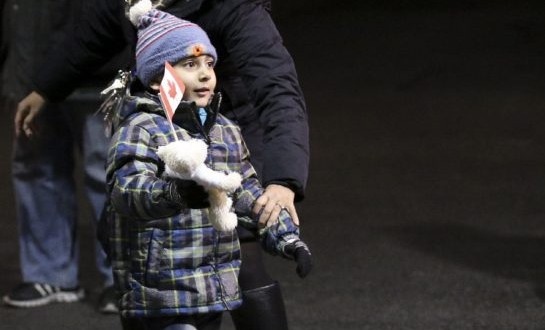 New planeload of Syrian refugees to arrive in Toronto, Report

New planeload of Syrian refugees to arrive in Toronto, Report

As Canadian cities resettle the displaced Syrian refugees who have been arriving since last week, 214 more landed in Toronto Tuesday afternoon.

These latest refugees will depart Beirut, Lebanon, in the morning and arrive mid-afternoon on a Royal Jordanian Airlines flight, McCallum said Monday. There will be a mix of privately sponsored and government-assisted refugees on board. The Liberal government has pledged to take in 10,000 refugees by the end of the year. By Monday, they were “just shy” of 1,000 Syrian refugees in Canada, Immigration Minister John McCallum said.

“We are still working hard to achieve our objectives,” he said when asked if the government will meet its resettlement goals. The plan is to have 25,000 refugees in Canada by the end of February 2016.

Last week, the first government plane of refugees arrived at Pearson with 163 Syrians, mainly of Armenian descent. A slew of dignitaries, including Prime Minister Justin Trudeau and McCallum, were on hand to welcome the new arrivals.

McCallum said it’s these experiences that have further convinced him Canada is doing the right thing.

“This is a matter of the heart,” he said. “It’s a matter of emotion. It speaks to the kind of country we are, and so, as time goes by, I have become more and more convinced that we are absolutely doing the right thing to bring 25,000 human beings from the horrors of a civil war and terrorist attacks over to our country, to our blessed, peaceful, free country.”

McCallum was in Toronto Monday to speak to about 60 prominent members of the business community. The government is hoping to raise $50 million in corporate donations to help fund the influx of refugees over the next few months, he said.

“It’s an aggressive target, but I think it’s a realistic target, having spoken to representatives from the business community,” McCallum said. “I think we will be able to raise this money.”

Web articles – via partners/network co-ordinators. This website and its contents are the exclusive property of ANGA Media Corporation . We appreciate your feedback and respond to every request. Please fill in the form or send us email to: [email protected]
Previous: Travis Vader tied to McCann killings by forensics, phone records
Next: Ecosystem Shift 6000 Years Ago Caused By Humans, Study Says