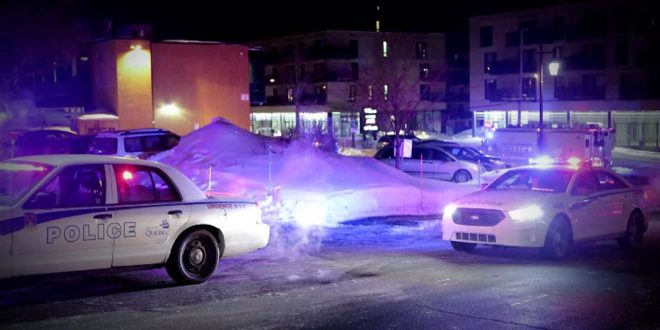 A shooting at a Quebec City mosque has left six dead and at least eight injured, police said.

A hospital spokeswoman says five people who were injured are in critical condition.

At least three people are currently between life and death according to a spokeswoman for the Centre Hospitalier Université de Laval.

Provincial police spokeswoman Christine Coulombe said the victims were believed to range in age from about 35 to about 70.

She said 39 others who were in the mosque escaped unharmed.

Coulombe said two suspects were arrested soon after the attack — one near the mosque, and the other near Quebec City’s downtown core.

Police have not yet released any information about the two, or the weapons used in the attack.

A joint terrorism task force that includes provincial police, the R-C-M-P and Montreal police has taken over the case.

Trudeau issued a statement Sunday to denounce the killings.

“We condemn this terrorist attack on Muslims in a centre of worship and refuge,” he said.

“On behalf of all Canadians, Sophie and I offer our deepest condolences to the family and friends of all those who have died, and we wish a speedy recovery to those who have been injured.”

Couillard also called the incident a terrorist attack and said the national assembly will lower flags to half-mast.

“All our solidarity is with those who are close to the victims, the injured and their families,” he said in a statement.

Couillard called a news conference early Monday morning and said there is no doubt in his mind the killings constituted an act of terrorism.

“This is a murderous act perpetrated against a specific community and with considerable means,” he said. “You can’t play around with semantics here.”

The premier made an impassioned plea to Quebec Muslims.

“We are with you, you are at home, you are welcome at home, we are all Quebecers,” he said. “We must continue to build a society together that is open, welcoming and peaceful. We will do it because we have the energy to do it and the will to do it.”

Web articles – via partners/network co-ordinators. This website and its contents are the exclusive property of ANGA Media Corporation . We appreciate your feedback and respond to every request. Please fill in the form or send us email to: [email protected]
Previous: Doctors Remove Little Girl’s Large Facial Tumor (Video)
Next: French Police Charge Brussels Bombing Suspect Mohamed Abrini Over Paris Terror Attacks