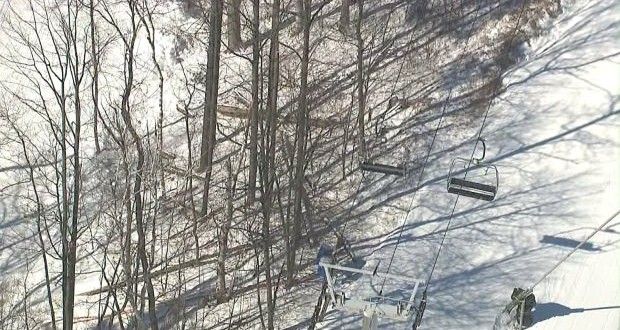 A seven-year-old boy who managed to hold onto his classmate who slipped off a ski lift said he was just helping a friend, and doesn’t feel like a hero.

Kostaki Papakonstantinou is being called a hero by police after he held on to his friend at an Ontario ski resort long enough for resort staff to set up a safety net below.

The victim and three of his school mates were seated in a chair lift heading up a hill at Lakeridge Ski Resort in Uxbridge on Thursday sometime before 11:50 a.m. when the victim lost one of his skis.

When the victim turned in his seat to look where the ski landed on the ground, he began to slip out of his seat.

Luckily, police say a boy sitting next to the victim grabbed onto him and held him for as long as two minutes as ski hill staff below the chair lift organized a response below him.

Lakeridge director of operations John Tustian said staff brought what they call a “catch net” and “tried to position themselves underneath the boy before he fell.”

The lift was stopped and the victim eventually fell into the net. But police say the boy bounced off of the catch net and fell onto the ground below.

Tustian says catching falling patrons from the chair lifts is something the staff practices as part of their emergency training, but “it’s not something that happens very often.”

The boy who held onto the victim has been identified as Kostaki Papakonstantinou, a student at Ellington Montessori School in Scarborough.

The victim was conscious as paramedics prepared to transport him to hospital. He was eventually airlifted to Sick Kids Hospital and his recovery continues.

Papakonstantinou and staff from the ski resort are being recommended for a citizen recognition award.

Web articles – via partners/network co-ordinators. This website and its contents are the exclusive property of ANGA Media Corporation . We appreciate your feedback and respond to every request. Please fill in the form or send us email to: [email protected]
Previous: Albatross Wisdom Hatches 40th Chick In Hawaii Nesting Colony, Even At Age 65
Next: Apollo 11 Crew Wrote on Moon Ship Walls, Smithsonian 3D Scan Reveals ‘Photo’