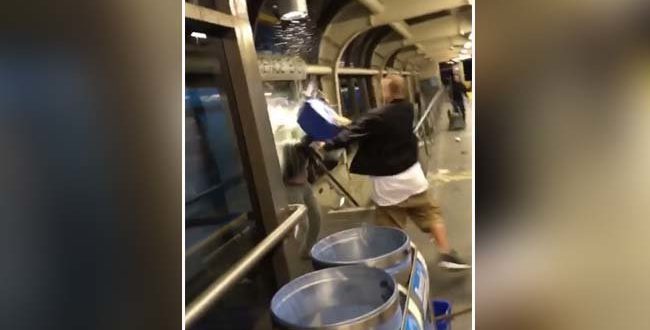 The TTC says it has handed surveillance footage over to Toronto police after a man was caught on video tossing a custodian’s bucket of mop water on a woman at Lawrence East Station.

An Instagram video shows the two arguing on the platform at Lawrence East station with a transit worker standing nearby.

The woman appears to reach into the mop bucket to flick water at the man, who then drops his bag, picks up the bucket, and dumps its contents over her head.

Police were told the fight began on a train and spilled into the station, according to Global News.

The outlet reported that investigators are trying to identify the suspect and a surveillance video has been ordered.

Web articles – via partners/network co-ordinators. This website and its contents are the exclusive property of ANGA Media Corporation . We appreciate your feedback and respond to every request. Please fill in the form or send us email to: [email protected]
Previous: New research: Perfect storm blamed for record-low 2016 Antarctic sea ice
Next: 9 Year Old Boy Heart Stop While He is Bite Hot Dog – here’s why