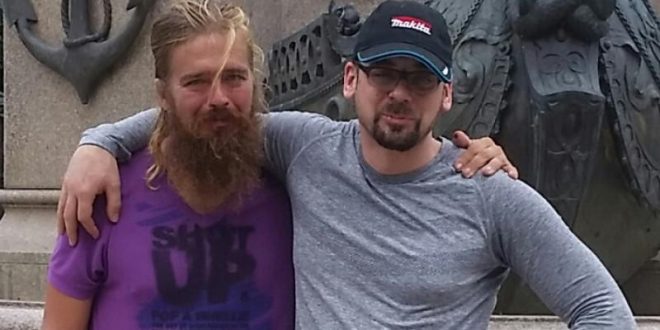 Anton Pilipa, 39, was picked up by Brazilian state police in December and admitted to hospital but has now returned to Toronto after he was last seen in Scarborough in 2012.

His brother Stefan made plans to bring Anton home after he learned of his appearance and launched a fundraising page to finance flights, hospital bills and consular fees.

He said he believed Anton, who he described as anti-poverty activist, was suffering from mental health problems at the time he vanished but was now doing “remarkably well”.

He added suspicions Anton made part of his journey to Brazil by foot, hitchhiking and hiding in the back of trucks.

He told CBC Toronto: “I feel amazed that he’s alive and had made it that far.

“I was really shocked. I didn’t want to get my hopes up. His health was starting to deteriorate. We got him just in time.

“I found myself being really frustrated all the time [during those years], always having that aching question: ‘Where is he? What happened to him?’

Anton was reunited with his family after he was found walking in Manaus with no passport or ID by Brazilian-Canadian police officer Helenice Vidigal who acted after she noticed his accent.

She told CBC: “I knew he didn’t belong to that road. Anton is a different type from us Brazilians, he stands out.

“I thought, if he says he’s Canadian, I’m sure I can find his family.”

She made the connection through Twitter after an online search.

Web articles – via partners/network co-ordinators. This website and its contents are the exclusive property of ANGA Media Corporation . We appreciate your feedback and respond to every request. Please fill in the form or send us email to: [email protected]
Previous: Illegal fishing during closures among fall 2016 convictions in ‘Newfoundland and Labrador’
Next: Scientists discover ancient undersea landslide near Australia