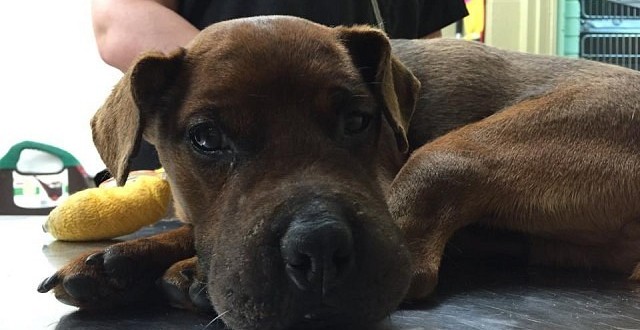 Police have charged an Amherstburg man in connection with the small dog found bound and left to die near the Walker Road Canadian Tire.

The Windsor Police Service says on Friday around 6pm, officers attended the Windsor/Essex County Humane Society after staff reported that individuals were attempting to take custody of the abused dog. Following an investigation, officers arrested a man at the scene. Police say he is not the owner of the dog.

A man walking his own two dogs, discovered the abused dog beside the Canadian Tire on Walker Rd. on Thursday. The dog’s muzzle, neck and paws were tightly wound with electrical tape.

Police officials say the dog could have been in the field for up to 12 hours prior to being discovered.

Michael Earl Hill, 32, Amherstburg is charged with willfully causing unnecessary pain/suffering or injury to an animal. He has since been remanded into custody.

Web articles – via partners/network co-ordinators. This website and its contents are the exclusive property of ANGA Media Corporation . We appreciate your feedback and respond to every request. Please fill in the form or send us email to: [email protected]
Previous: Stowaway Cobra found on ship at NJ port “Video”
Next: One arrested after a death in Richmond Hill home, Report