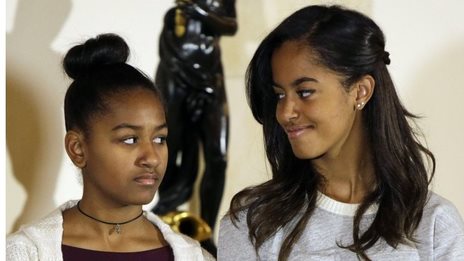 Sasha and Malia Obama made holiday headlines this week when they were captured being a little less-than-interested in the President’s “turkey pardoning” speech. Dropping off some pretty glorious side-eyes at their dad, the girls stole the spotlight from Mac and Cheese, the turkeys whose lives were saved.

And while a bit of fun was poked at the lighthearted ordeal, one person was not entertained. Elizabeth Lauten, communication director for U.S. Rep. Stephen Fincher, took to her Facebook page to scold Sasha and Malia, telling them to “try showing a little class:”

“Dear Sasha and Malia, I get you’re both in those awful teen years, but you’re part of the First Family, try showing a little class. At least respect the part you play. Then again your mother and father don’t respect their positions very much, or the nation for that matter, so I’m guessing you’re coming up a little short in the ‘good role model’ department.”

The GOP staffer went on to criticize them for their dress, writing, “Dress like you deserve respect, not a spot at a bar.”

Yesha Callahan, a writer for the Root, observed on Twitter:

In her spare time when @DCGopGirl is not doing work for @RepFincherTN08 she shames teenagers on Facebook pic.twitter.com/jgeuxJqlYW

Erin Donnelly of Refinery29 even accused Lauten of “slutshaming” the president’s daughters. Slutshaming is a term used by feminist blogs such as Jezebel to refer to the denigration of young girls, teens and women for the way they dress or behave, especially if that dress or behavior is deemed sexual or provocative.

Only in America can a black man become the leader of the free world and still be called a poor role model for his children. #elizabethlauten

“I reacted to an article and quickly judged the two young ladies in a way that I would never have wanted to be judged myself as a teenager,” Lauten wrote. “After many hours of prayer, talking to my parents and re-reading my words online, I can see more clearly how hurtful my words were. Please know that these judgmental feelings truly have no pace in my heart. Furthermore, I’d like to apologize to all of those who I have hurt and offended with my words, and pledge to learn and grow (and I assure you I have) from this experience.”

Web articles – via partners/network co-ordinators. This website and its contents are the exclusive property of ANGA Media Corporation . We appreciate your feedback and respond to every request. Please fill in the form or send us email to: [email protected]
Previous: NASA : Orion Launch On Track For Dec. 4 From Cape
Next: Chernobyl drone : This Video Shows the Eerie Parts of Chernobyl Where Only Drones Can Go (Watch)